When Virender Sehwag ‘trolled’ Sachin Tendulkar, and got it back!

Sachin Tendulkar and Virender Sehwag had some smashing partnerships during their playing days. It was not for no reason that they were referred to as a dynamic opening duo in one-dayers. But, off the field too their cracking chemistry continues

Sachin Tendulkar and Virender Sehwag had some smashing partnerships during their playing days. It was not for no reason that they were referred to as a dynamic opening duo in one-dayers. But, off the field too their cracking chemistry continues. 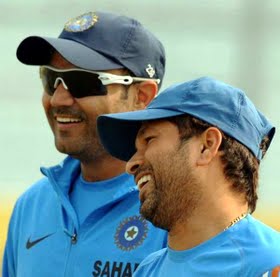 Of them Virender Sehwag is known for his street smart posts on Twitter, very much like the vibrant knocks he played during his international career. Tendulkar too must have been aware of the same, since he himself is very much active on the social networking site. Tendulkar is many years senior to Sehwag. But, that did not stop Viru from taking a ‘dig’ at Sachin ‘paaji’.

The beginning of the story was when Sachin tweeted a congratulatory message to the Indian team on their victory at Eden Gardens in Kolkata over New Zealand, which gave them an unassailable 2-0 lead in the three-match series.

A spectacular victory by Team INDIA & many congratulations on regaining the no 1 position in the world test cricket!! #INDvNZ

Sehwag, at his cheeky best, replied that commentators like him too need encouragement. He was actually one of the commentators in the match.

To this, Sachin responded in kind.

But, Sehwag bowled him another googly

Sachin though had an equally witty reply

Well, they may have retired from international cricket, but on Twitter, they remain master blasters...

Twitterati joined in the fun as well...

@sachin_rt Haha..What a banter by you both...