Sunrisers Hyderabad will look to carry on their red-hot form when they face Delhi Daredevils in match number 42 of the Indian Premier League on Thursday at Hyderabad.

Sunrisers Hyderabad will look to carry on their red-hot form when they face Delhi Daredevils in match number 42 of the Indian Premier League on Thursday at Hyderabad. Sunrisers will go into the match with their confidence further enhanced as won a close game against Rising Pune Supergiants in their previous encounter. The tense victory took them to the top of the points table. But, with a mad scramble at both ends of the table, they need to keep winning to stay atop. As for Delhi Daredevils, they have suffered setbacks in the last couple of games, and will look to get back in the groove.

Sunrisers' rise to the top has been mainly because they have fired as a combined batting and bowling unit. With the willow, skipper David Warner has been superb, and has led from the front playing some great knocks. In matches when he has failed, Shikhar Dhawan has picked up the gauntlet, and has fired the team to impressive victories. Dhawan has displayed a lot of maturity under pressure, and his innings against Pune was instrumental on a tough batting surface. In Kane Williamson, they have another high-quality batsman who is capable of winning matches.

As has been often mentioned during the course of the IPL, Sunrisers have the best bowling attack in the tournament by a distance. The same was again evident against Pune. Ashish Nehra led from the front with three big wickets. Bhuvneshwar Kumar has been consistency personified throughout the event. He will look to clinch his place back in the Indian team with such match-defining efforts. About Mustafizur Rahman, the more said the better. He has been next to unplayable, and Pune tried too hard not to give wickets to him.

On current form, and looking at the strengths of the two teams, Delhi will have their task cut out against the Sunrisers. They have experimented in the last couple of games, resting some of their key players, and that has definitely not gone in their favour. Delhi must play their best side against Sunrisers. At the top of the batting order, the performance of opener Quinton de Kock will be crucial. De Kock has been in very good form in this edition, and will look to continue the same. Rishabh Pant, Sanju Samson and Karun Nair are the other key batsmen in the team who can make a difference. 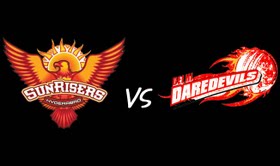 Delhi have some very good local talent in their midst in the form of captain Zaheer Khan himself, who has been formidable for the team at the start of the innings, and towards the death. Leggie Amit Mishra has also bowled in sync with his experience. Mohammad Shami has returned from injury, but he is yet to display his skills of old. In Chris Morris and Carlos Braithwaite, they have two quality all-rounders, but they haven't been as consistent as expected. Also, Delhi have been severely handicapped since Pawan Negi has failed to live up to all the hype around him during the auctions.