Three overs – that was exactly the duration for which India dominated the second ODI against Sri Lanka at Hambantota. Their performance was in stark contrast to the first one-dayer that was played on Saturday.

Three overs – that was exactly the duration for which India dominated the second ODI against Sri Lanka at Hambantota. Their performance was in stark contrast to the first one-dayer that was played on Saturday. In fact, India looked a shadow of their self on Tuesday. Their performance was one India would like to easily forget -- after all it was an eminently forgettable performance in itself. There are some days on the cricket field when nothing goes right for you at all. It was one such day at Hambantota for Team India. Having said that, the game also thoroughly exploited Indian batsmen’s weaknesses against the moving ball. 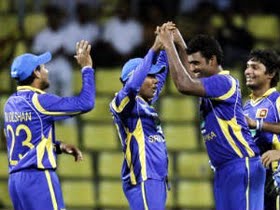 Medium-pacer Thisara Perera, in particular, was out of the ordinary. He made the ball swing in the air and seam off the pitch as well, and the Indian batsmen had no answer to the probing questions posed by him, which is an extremely dangerous sign for the rest of the series. After all, the conditions at Hambantota weren’t unplayable, and all Perera did was maintain a disciplined line. Yet, a strong Indian batting line up faltered like a team of non-performing players. Did India get overconfident following their impressive effort in the opening game? Possibly.

The lazy manner in which Virender Sehwag pushed a delivery back to Perera was an early indication of the fact that India’s weren’t in the right frame of mind to compete. May be, just may be, because Sri Lanka were so ragged in the first three overs, the Indian batsmen thought they could have it easy again. The biggest boost for the hosts came when they saw the back of the formidable Virat Kohli for just one. The Indian number three had scored hundreds in each of his previous three knocks against the same team. Even before the match, the previews discussed as to whether Lanka can get Kohli early. Once they did, the Lankans were a totally different outfit.

The continuous failures of Rohit Sharma continue to be a hindrance for India. As for the lower order, they struggle most often where the top order fails. This game was no different. Suresh Raina couldn’t handle the pressure of the situation while M S Dhoni was lucky to survive for as long as he did after being dropped early on. It was a highly disappointing effort by the Indian batsmen overall, something which they should be seriously concerned about.

Once the Lankans bowled India out cheaply, it was all too easy for the hosts. For India to compete, they needed something extraordinary from their leading bowlers – Zaheer Khan and R. Ashwin. Instead, the partnership between Tillakaratne Dilshan and Upul Tharanga took the game away from India rather easily.

It might be difficult, but India, somehow, have to put this disastrous game out of their system and move ahead.