Only ODI between England vs Ireland abandoned due to rain

The only One Day International between England and Ireland at Dublin, Ireland washed out due to rain. After their decent World Cup campaign, Ireland had an opportunity to prove their strength against new look England at their home ground. 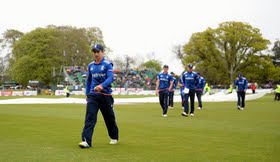 Captaining in his first International match, England’s James Taylor won the toss and opted to bowl first. Zafar Ansari, Mark Wood, David Willey, James Vince and Jason are five new faces who made their international debut for England in this game. Only 18 overs of game were possible before rain began in which Ireland managed just 56 runs at the loss of 4 wickets.

Ireland started their inning in a cautious manner against tight and steady bowling from the debutant Mark Wood as batsmen were not able to even rotate the strike. Paul Striling and William Porterfield misjudged a single and former ran himself courtesy of direct throw from Bairstow. Porterfield was the first scalp of Wood when he dragged the ball on to his stumps in try to cut the ball which was too close to his body. Only Ed Joyce was the only Irish batsmen who looked little comfortable against the likes of Wood and Bresnan. Joyce was unbeaten on 23 on rain arrived. Neil O’Brien soon perished after the Powerplay when he played lose drive into the hand of J Vince against Bresnan. Struggling inning of 5 off 19 deliveries from Balbirnie came to an end when he was caught by J Roy in the slip off D Willey.

In the end, it was disappointment for both the sides, Ireland not often manage to get any game against top nations and young England team would have ideally wanted to show their talent and fix their spot in the full time English squad.