The first Test Match between Bangladesh and West Indies is interestingly poised with all the three results possible on the final day tomorrow.

The first Test Match between Bangladesh and West Indies is interestingly poised with all the three results possible on the final day tomorrow. The visitors are holding onto a modest second innings lead of 215 runs with 4 wickets in hand. Veteran Shivnarine Chanderpaul who scored a double century in the first innings did not turn up to bat today as he was unwell. Should the southpaw come out to bat on the final day, West Indies will feel confident of a draw for sure.

The fourth day’s play saw history being made as Bangladesh registered their highest ever total by surpassing the previous best of 488 made in 2005 against Zimbabwe at Chittagong by quite some margin. The Tigers resuming the penultimate day at 455 for 6 were bowled out before lunch for 556 in 148/3 overs. Young Nasir Hossain fell just four runs short of a maiden Test century. He made an entertaining 96 (from 136 balls with 6 fours and 4 sixes) and his overnight partner Mahmudullah made 62 (from 120 balls with 6 fours and a six). 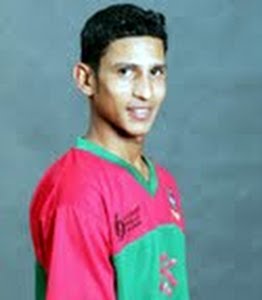 Bangladesh finished with a first innings lead of 29 runs though one must remember that the West Indies were not bowled out but declared their first innings losing only four wickets. In their second innings, despite losing Chris Gayle cheaply to Rubel Hossain, the visitors settled down nicely through a massive 189-run stand for the 2nd wicket. No.3 Darren Bravo scored 76 (from 121 balls with 10 fours) in that stand with Kieron Powell, who would go onto become the second West Indian opener to score a century in each innings after Gordon Greenidge. The 22-year-old left-hander went on to score 110 (from 197 balls with a dozen fours and a six).

West Indies who were going along strongly at 209 for 1 slipped to 225 for 5 out of nowhere and closed the day’s play shaken up at 244 for 5. Skipper Darren Sammy managed to stay unbeaten on 15 and holds the key for his side to collect few more runs to feel secured about the match and leave the Tigers no chance of a historic win. For the Bangladeshis, Sohag Gazi, Rubel Hossain and Shakib Al Hasan picked up two wickets each.