Suryakumar Yadav played a responsible knock of 79 from 43 as Mumbai Indians have almost booked their spot in the playoffs. Bangalore were looking set for a 180 plus score at the 15 over stage, but Bumrah pulled back things considerably as RCB had to settle for 165.

Josh Philippe, who replaced Finch opened the innings with Padikkal as Pollard won the toss and chose to bowl first. After a couple of quiet overs, the openers got going, especially Padikkal. Philippe took some time though even as the bowling from MI wasn’t penetrating enough. The pair were playing their shots without any fear as they soon raced to 54 at the end of six overs.

Pollard then turned to spin to bring some wickets and MI’s ace spinner Rahul Chahar didn’t disappoint. A great stumping by de Kock meant Philippe had to walk back. Skipper Kohli found it tough to get going, especially against Krunal Pandya but it was Bumrah who got him out for a 14 ball 9. Padikkal on the other hand, was looking in fine touch as he brought up a 30 ball fifty. He was severe on Chahar as he scored 16 runs in the 15th over against the leggie.

ABD, who had just gotten going, was caught against the bowling of Pollard, which meant neither Kohli nor AB could fire today. Still RCB had a lot of depth in their batting and a total of 180 looked likely even then. But a certain Jasprit Bumrah bowled a double wicket maiden in the 17th over of the match while accounting for Dube and the well set Padikkal’s wickets. With Morris also perishing after a boundary, it was down to Gurkeerat who managed a couple of boundaries in the final over as RCB reached a respectable 164-6. 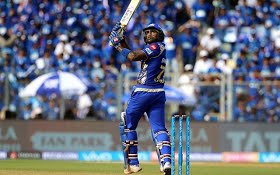 Ishan Kishan and de Kock began the chase of 165 in a rather controlled approach, as they were trying to hit a boundary per over. Steyn, who was playing a game after a long break, failed to provide any breakthrough as MI reached 36-0 at the end of five overs. Siraj, who wreaked havoc the last time he held the new ball, was introduced as late as the 6th over, but picked up a wicket straightaway as de Kock found Gurkeerat at deep mid-wicket.

With Washington Sundar bowling his tight lines as he always does, Kohli was tempted to bring Chahal from the other end and that move paid off as Kishan was dismissed for a quickfire 25. RCB were sensing a chance to comeback into the game as Siraj scalped Saurabh Tiwary as well. However, it was Suryakumar Yadav who was standing between RCB and a win as was playing some elegant shots. He was the only one who was able to stand up against Chahal and put the pressure back on him.

At 86-3, MI required 79 more to win from eight overs, and Kohli turned to Steyn for a wicket. Surya Yadav however turned this into a run scoring opportunity as he slammed three boundaries in that over. Krunal Pandya was replaced with his younger brother as he was caught by Morris at long-off against Chahal. The equation was still very much under control for MI which got even simpler courtesy three boundaries against Siraj by Yadav. Just 16 were required from the final two overs, and there was a little bit of drama as Hardik was dismissed by Morris right after a six. Pollard hit a boundary and Yadav followed it up with another as MI won the match with 5 balls to spare.