India will take on South Africa in the first Test of the three-match series starting at Visakhapatnam on Wednesday, October 2.

India will take on South Africa in the first Test of the three-match series starting at Visakhapatnam on Wednesday, October 2. The teams go in having shared the T20 series 1-1. However, taking into account experience and home conditions, India has a definite advantage and should be highly disappointed if they don’t put it across the Proteas.

The last time South Africa was in India, they were given a 3-0 pasting despite having big names like AB de Villiers, Dale Steyn, Faf du Plessis and Kagiso Rabada in the squad. They will undoubtedly be keen to put up a much better show this time around. It clearly won’t be easy though.

The Indian team is all but settled but for a couple of positions. Rohit Sharma is all set to open the innings at Visakhapatnam. And, as legends like VVS Laxman have found out in the past, it is a really tough job. In fact, Laxman has even suggested that Rohit shouldn't change his technique and mindset too much. "I believe that the mistake I made was changing my mindset which got me great success batting in the middle order, whether it was at number 3 or number 4,” VVS said while speaking to former India wicketkeeper Deep Dasgupta on his YouTube show ‘Deep Point’. 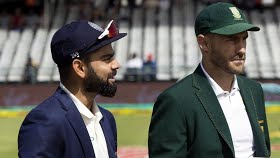 In the wake of his duck in the practice game against South Africa, his performance will be even more keenly observed. Rohit coming into open will also mean Mayank Agarwal will have a third new opening partner in just his fifth Test -- after Hanuma Vihari in Australia and KL Rahul (in Australia and West Indies). It would be a challenge for the opening batsman no doubt, who has made a good start but is looking to establish himself permanently in the team.

The other man under pressure would obviously be Rishabh Pant. The young wicket-keeper has divided opinion over his presence in the team despite constant failures. But, one thing goes without saying -- he enjoys the confidence of the team management. As for the bowling, Mohammad Shami and Ishant Sharma will have to lift their game further in the absence of Jasprit Bumrah.

South Africa begins the series as underdogs but the Tests will also give the opportunity for young guns to turn heroes. Aiden Markram got a hundred in the practice match so he will be confident of performing well. Temba Bavuma and Anrich Nortje are impressive upcoming players while Lungi Ngidi was the man of the match on Test debut against India at Centurion last year.

Considering the challenging conditions in India, the seniors will be expected to stand up. Skipper Faf du Plessis must lead from the front with the bat while Dean Elgar also has experience of batting in India even as Quinton de Kock will look to carry his T20 form into the Tests. South Africa has an impressive bowling attack in Kagiso Rabada, Vernon Philander and Keshav Maharaj, and the trio will be keen to make a difference.

Weather report: As per the weather forecast, there is an 80 percent chance of rain on an opening day and 50 and 40 percent on days two and three.

World Test Championship impact: India can climb up to 240 points by claiming all the 120 points while South Africa will join India at the top in case they get the same number of points.