Australia and West Indies will battle it out in match number 10 of World Cup 2019 at Trent Bridge on Thursday.

Australia and West Indies will battle it out in match number 10 of World Cup 2019 at Trent Bridge on Thursday. Both teams go into the game having won their respective first matches.

While Australia has had the better of West Indies over the last few decades, this Caribbean side is a lot tougher as they proved in the game against Pakistan as their bowlers rolled over the Asian side for 105. Australia would still fancy their chances though. And while they were always expected to win against Afghanistan, the clinical effort would have pleased them.

Oshane Thomas was the star of the show for West Indies against Pakistan and he would be keen to make an impact against the Aussies as well. Jason Holder said they are here not just to compete but try and win the World Cup. And Australia should surely be wary of them. This West Indies pace attack has a slight throwback to yesteryears. 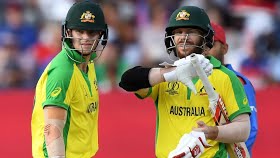 A contest within a contest would be the pace battery versus the batsmen of the two teams. Andre Russell has promised that the Aussies can expect some chin music while Nathan Coulter-Nile has stated that West Indies should expect no favors either. Both teams will not be expected to give an inch.

Australia put up an impressive show against Afghanistan with their bowlers restricting the opponents before David Warner and Aaron Finch slammed half-centuries to ensure there was no hiccup for the defending champions. Steve Smith would like to get among the runs against West Indies. Pat Cummins and Adam Zampa could be the key with the ball.

Apart from Thomas, the half-century by Chris Gayle was the big plus for West Indies in the previous match. Shai Hope is another impact player with the bat, and there are a few others as well like Shimron Hetmyer. So the Aussie pacers could definitely be challenged. An intriguing contest on the cards.