Whatever’s wrong with the Indian spinners…

Indian skipper M S Dhoni’s wish for a turner has been granted, but it is the English spinners that have made the best use of the conditions. While Pragyan Ojha did manage to pick up a five-wicket haul in England’s first innings, even hewasn’t as effective as the duo of Monty Panesar and Graeme Swann.

Indian skipper M S Dhoni’s wish for a turner has been granted, but it is the English spinners that have made the best use of the conditions. While Pragyan Ojha did manage to pick up a five-wicket haul in England’s first innings, even hewasn’t as effective as the duo of Monty Panesar and Graeme Swann. When the England spinners bowled, the pitch looked like a minefield. In stark contrast, when R. Ashwin, Ojha and Harbhajan Singh were in action, the surface hardly played any tricks. Ashwin and Ojha’s lack of experience clearly came to light even on a helpful pitch while Singh looked a shadow of the spinner who dismantled the mighty Aussies a decade back. 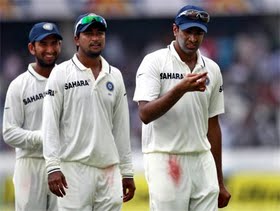 At the beginning of the Test, there was never seen before debate over the pitch, with M S Dhoni asking for a rank turner. Dhoni was highly critical of the surface at Ahmedabad, stating the pitch did not do enough to help his bowlers in the second innings. Clearly, he cannot say the same about the Wankhede pitch. Spinners from both teams were in action on day three, and while India struggled to make any sort of an impression against Alastair Cook and Kevin Pietersen, even the experienced Indian batsmen had no answer to Englandspinners’ wonderful performance. The difference in the quality of spinners between the two sides was clearly on show.

Dhoni’s decision to strongly demand rank turners seems to have backfired, at leastfor the moment. The skipper himself has failed to show the technique to play spinners, falling to Panesar in both innings. Further, going to the series, there was also concern over India’s out of form batting line-up. This has been exposed to the hilt bythe English spinners at Mumbai. The problems begin right at the top. Gautam Gambhir has managed to cross 50 in only his latest innings. Further, Virender Sehwag has had a horror 100th Test even as Sachin Tendulkar has been a mere passenger all along.

A lot was expected of Yuvraj Singh and Virat Kohli, but even they have failed the trial by spin, disappointing considering they have been brought up on turning surfaces. The shots played by Kohli have been particularly loose. He has been a great player in ODIs without doubt, but he certainly needs to work hard on his technique in Tests. The only reason India have got good scores in this series has been because of the magnificence of the new number three Cheteshwar Pujara. The first time he failed in the series, in the second innings at Mumbai, the other batsmen, barring Gambhir, India could not withstand the pressure.

One of the reasons Dhoni has been adamant on spinning pitches is because he knows his batsmen aren’t in the best of nick. But, even would have expected a better performance from them, at least on tracks of their choice. India failed the trial by pace abroad and now there are on the verge of losing the test at spin by home. Miracles apart, Dhoni should be ready for plenty of backlashes at the conclusion of the Mumbai Test.