In spite of the fact that Ravichandran Ashwin and Wriddhiman Saha hit hundreds on day two of the St Lucia Test, India did not find themselves in a position of dominance.

In spite of the fact that Ravichandran Ashwin and Wriddhiman Saha hit hundreds on day two of the St Lucia Test, India did not find themselves in a position of dominance. This was because of what transpired before and after their departures. While Saha and Ashwin added 213 for the sixth wicket, India ended up losing their last five wickets for merely 14 runs, to crumble from a healthy 339 for 5 to 353 all out. This was after they had lost their first five wickets for 126. This means taking away the Ashwin-Saha stand, the rest of the batting managed just 140 runs. After holding India to under 400, West Indies then continued their good run with the bat, finishing the day on a strong 107 for 1. 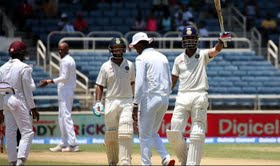 With Rajendra Chandrika dropped, West Indies opened with Kraigg Braithwaite and Leon Johnson. The move worked as they managed to notch up a half-century stand. Braithwaite, who is known for holding an end up, but had failed in his endeavours previously, batted with resolve to keep the Indian bowling at bay, and finished the day unbeaten on 53. The only moment when Braithwaite looked uncertain was when an edge from Mohammed Shami did not carry. Johnson was dropped by Lokesh Rahul, but he made amends by running out the batsman. Having a good start though helped Darren Bravo and Braithwaite consolidate.

Earlier, Ashwin and Saha continued from where they left off for India on day one. Both were assured in their game, and did not loosen up. West Indies continued with their strategy of crowding one side of the field, and preying on the batsmen's patience, hoping they would make a mistake, but that did not happen as Ashwin and Saha kept playing the ball on merit. While the first session of play was largely silent, Saha took up the responsibility of attacking in the second. He smashed five boundaries in a period, one of which took the partnership past 150. Ashwin's first boundary of the day took him to 99, and he went to lunch at that score. Saha, meanwhile, progressed to 93.

Just before the break, Shannon Gabriel hit Saha on the forearm with a rising delivery. As a result, the wicket-keeper returned with a swollen arm. But, the pain was reduced as both overnight batsmen got their hundreds in the post-lunch session. With his feat, Saha became only the fourth Indian wicket-keeper to score a century away from home. The excellent partnership ended when Saha edged Alzzari Joseph, going for a drive. The wicket gave West Indies renewed energy, and even as Ashwin tried his best to hold one end up, the tail was embarrassingly exposed.

Miguel Cummins got Ravindra Jadeja, Ashwin and Ishant Sharma in the space of 10 balls. Ravindra Jadeja played a nervous poke on comeback while Ashwin and Ishant could not keep out well-directed short balls. Ashwin's 118 was his fourth Test century, and his fourth against West Indies as well. While Cummins struck from one end, at the other, Gabriel had Bhuvneshwar Kumar caught at short leg. India lost their last three wickets without the addition of a single run. Buoyed by their bowling comeback, West Indies sizzled with the bat as well.