When Day three came to an end, South Africa had batted themselves into a reasonably comfortable position. Although they scored just a little over 200 runs, they had lost only a solitary wicket throughout the day

When Day three came to an end, South Africa had batted themselves into a reasonably comfortable position. Although they scored just a little over 200 runs, they had lost only a solitary wicket throughout the day. Still, England were in with a chance to push for victory when day four got underway. There was only one team who could win from that position, and it were the visitors. South Africa began the day with a huge deficit of 276, and a couple of quick wickets could have undone all of South Africa’s great work the previous day.

The hosts however continued their fight back, and did not slouch even an inch. So well did they bat on Tuesday, the Proteas ended up declaring the innings with a deficit of 2, and three wickets still in hand. South African skipper, Hashim Amla, who began the day on 157, carried on his marathon knock. Amla has always been known to be one for the long haul, and following his struggles over the last year, he would have been hungry for as many runs as possible. Not surprisingly then, he batted out for 707 minutes and 477 balls for his 201, the third longest innings even played in a South African Test. 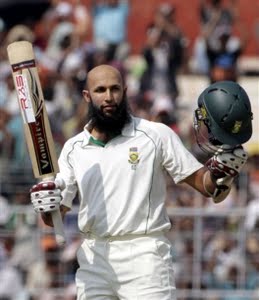 Like Amla, this innings was also crucial for Faf du Plessis. If Amla struggled in India, du Plessis had an agonisingly forgettable time. Amla’s figures on the India tour would look great in comparison. Du Plessis needed a big innings to get his confidence back. Du Plessis spend a lot of time at the crease in the last Test in India, but couldn’t make much of an impression. That wasn’t to be the case at Cape Town. The middle-order bat’s 216-ball innings ended up producing a rather significant score. If anything, du Plessis would be disappointed that he couldn’t convert the knock into a hundred.

There were no such complaints for Temba Bavuma. The middle-order batsman was under immense pressure going into the Test. South Africa’s quota policy made many to believe that he was lucky to get a longer run than others. Bavuma clearly had a point to prove. He had made some impressive cameos to show, but had nothing much in the form of proper innings. That changed at Newlands however as he raced towards a maiden Test hundred with consummate ease. An unbeaten 102 from 148 balls with 16 fours indicates how fluently he flowed.

While the bowlers from both sides have struggled in the Test, England would be particularly disappointed with their effort in the field. They dropped a few chances on Monday and although many difficult ones came their way on day four, they dropped too many. Six in a day, and nine overall in an innings is unacceptable. You will never win Tests with that kind of a record, no matter how well the bowlers bowl, or how poorly the batsmen fare. England will definitely have to take a closer look at this aspect, especially as Jonny Bairstow’s horror show behind the stumps continued.