The third and final ODI at Dhaka has been abandoned following a thunderstorm. The match had witnessed three rain interventions.

The third and final ODI at Dhaka has been abandoned following a thunderstorm. The match had witnessed three rain interventions. India batted out for 34.2 overs to score just 119 for 9 on a pitch that was highly difficult for batting.

It looked like a repeat of the second ODI with the ball moving off the pitch alarmingly. By the time a passing shower hit the ground, India were reeling at 13 for 3 in 8.3 overs. Robin Uthappa departed first edging a loose drive off Mortaza to the slips in the 5th over. Rahane got out three balls later looking to tuck a short ball from Al Amin Hossain and nicking the away going seamer to slips. 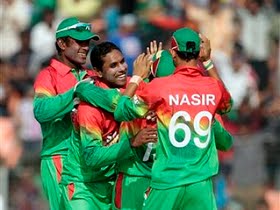 AT Rayudu got out to Taskin Ahmed with the ball angling in and kicking away off the seam to force him to glove it to the keeper. After play resumed, India lost its fourth wicket with Manoj Tiwary getting edged out to slips off Al Amin.

Rain returned again in the 13th over with India at 37 for 4. Play resumed after a long break with the match getting reduced to 41 overs a side. After a brief partnership, India lost Skipper Suresh Raina who gloved a sweep to a turning ball from Shakib to the keeper down the legside. Raina scored 25 from 25 balls and his exit saw India slip to 57 for 5 in the 19th over.

Shakib struck twice again by cleaning up Wriddhiman Saha with an arm ball and then trapping Cheteshwar Pujara (27 from 63 balls) lbw with one that turned slightly from middle. By the evening, a strong thunderstorm abruptly ended the match with India on the brink of getting bowled out cheaply. Stuart Binny was trying his best to get some respectability to the Indian total with his unbeaten innings of 25 with 4 fours.

Toss and Teams: India have won the toss and opted to bat first in the Third and final ODI at the Shere Bangla National Stadium.

Bangladesh have made one change with Sohag Gazi replacing Mahmudullah and for India, Manoj Tiwary comes in for Amit Mishra.