This was the contest between the teams ranked two on the point table- one from the top and other from the bottom. One team is persisting with same playing eleven, right from the start of the tournament and the other is still not able to find its best eleven. The result was obvious that the stable one will emerge victorious. 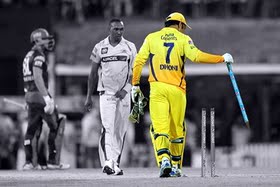 With Chennai Super Kings winning the toss and batting first, their openers got them to off a flying start as this have been a pattern of this tournament so far. They were not afraid to play their shots and had a license to go after the bowling.

Bowling was a disappointment for Kings XI Punjab and fielders dropping the catches laid them further down. Johnson dropped two sitters today- one each of McCullum and Raina. Punjab did manage to get a wicket in power play but until then CSK had already scored 50 runs in the fifth overs.

McCullum played the shots all over the ground and scored 66 runs with eight fours and three sixes. He was well supported by Smith(26) and Raina(29). MS Dhoni(41) and Ravindra Jadeja(18) finished the inning on high note.

Chasing a mammoth total of 193 runs, Punjab was pushed on back foot when Virender Shewag was dismissed in very first over. Vijay and Marsh tried to recover their team but they again lost the latter’s wicket in run of play. Punjab never looked on track from there on. CSK spinners were all over them. Ashwin and Jadeja bowling well in tandem together saw Punjab loosing half of their side just on 55.

Spinners didn’t stop here only and they continued to take wicket at regular interval. Punjab neither managed to score runs quickly nor save their wickets for the late slaughter. Only thing they managed was only 95 runs in their full quote of 20 overs. Murli Vijay with 34 runs, was the highest scorer for the Kings and no other batsmen had made any significant contribution. The total contribution of other ten batsmen for Punjab was 53 runs.

This 97 runs defeat, is the biggest defeat for Kings XI Punjab in terms of run margin. Ashish Nehra is second in the list of highest wicket taker in this IPL season and he is just one wicket away from the Purple cap.

All in all we can say that it was a very comprehensive victory for the men in yellow. With this win now, CSK is now well placed at top of the table and they pushed KXIP at the bottom.

Player of the Match: Brendon McCullum