Rohit Sharma roared back to form with an impressive 87 off 96 balls in the second ODI against New Zealand on Saturday at the Bay Oval as India won the game by 90 runs to go 2-0 ahead in the series.

Rohit, who was declared man of the match, featured in yet another hundred-run stand with Shikhar Dhawan, hitting nine fours and three sixes in his innings. He, however, admitted that he was not sure how the pitch would behave, and hence felt 324 was a par score.

“Good feeling (for MoM) but more importantly, we won the match. We didn't know how the pitch will behave. The last time when SL and NZ played here, it was a high scoring game. When we got 324, we thought it was a par score and not a big score. Credit to our bowlers for doing a good job,” Rohit said. 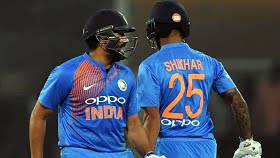 On his 14th century stand with Dhawan, Rohit said that he enjoys batting with the left-hander and that the two understand each other well.

“We know each other since long and have a good understanding. Important for the team to get a good start and I have always enjoyed batting with Shikhar, I am sure it's the same for him too. Lovely ground here and it was nice to see such a big crowd on an open ground,” added Rohit.

The third ODI will also be played at the Bay Oval on Monday, where a victory would see India clinch the series.