India dominated Day 4 of the Mumbai Test at Wankhede Stadium on Sunday thanks to splendid efforts from skipper Virat Kohli and Jayant Yadav. They ended up amassing 631 in their first innings, before having England 6 down for 182 by end of day’s play. Here are significant numbers from the penultimate day’s play. 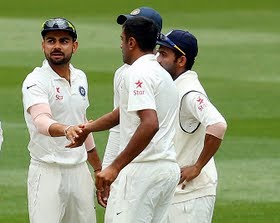 Kohli’s double hundred saw his Test career average rise to over 50. He already averages over 50 in ODIs and T20s. He thus has become the first batsman to average over 50 in all three formats of the game.

Following his 235, Kohli has now scored 640 runs in the series. This is the most by an Indian batsman in a Test series against England. He went past Rahul Dravid, who totalled 602 during the series in England back in 2002, when the former Indian captain was in prime form.

Kohli’s feat was the seventh instance of an Indian batsman scoring more than 600 runs in a Test series. Kohli, Sunil Gavaskar and Dravid have all done this twice while Dilip Sardesai is the only other batsman to have done so.

Kohli’s 235 is now the highest by an Indian captain in Tests. He has taken over from his predecessor, who smashed 224 against Australia at Chennai in 2013. Next in line in Sachin Tendulkar’s 217 followed by Kohli’s 211 and Gavaskar’s 205.

India scored 600-plus against England for the fourth time. The previous three instances at The Oval in 1990 and 2007, and at Headingley in 2002.

Keaton Jennings became the fourth batsman to score a century and a duck on debut. Mohammad Wasim, Andrew Husdon and Gundappa Viswanath are the others to have done the same.