A formidable Team India eased past West Indies to become the first team to enter the Semi-Finals of the ICC Champions Trophy 2013. With their victory, India have caused the exit of Pakistan from the tournament and the upcoming match on Friday between South Africa and the West Indies will be a virtual quarter-final in Group B.

A formidable Team India eased past West Indies to become the first team to enter the Semi-Finals of the ICC Champions Trophy 2013. With their victory, India have caused the exit of Pakistan from the tournament and the upcoming match on Friday between South Africa and the West Indies will be a virtual quarter-final in Group B.

Ravindra Jadeja set up the Indian victory with a maiden five-wicket haul that demolished the West Indian batting unit. Darren Sammy scored a brilliant 56* from 35 balls to rescue West Indies from a hopeless position of 182 for 9 to 233 for 9. West Indies seemed to be off a bright start before a dangerous looking Chris Gayle (21 from 18 balls) slashed a Bhuvneshwar Kumar delivery to get caught by a leaping Ashwin at first slip with the score at 25 for 1 in 5 overs. Johnson Charles, the opener took the Indians by surprise with his aggressive strokeplay and put them under pressure with a quick fifty. Jadeja provided the crucial breakthrough with a deadly arm ball that had Charles (60 from 55 balls with 7 fours and 2 sixes) lbw. 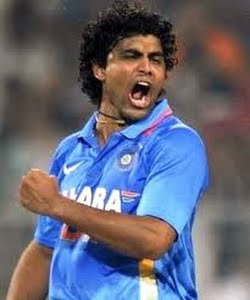 West Indies from 103 for 1 in the 20th over slipped to 109 for 4 in 24 overs to waste Charles’ efforts. Jadeja got Marlon Samuels out next after rightly asking for a review and confirming that his arm ball had first struck the pad before hitting the inside edge. Ramnaresh Sarwan fell cheaply again, this time caught down the legside with an inside edge off Jadeja. A scratchy Darren Bravo who consumed 83 balls to score just 35 was lured out of his crease by a teasing off break from Ashwin which had him stumped by miles.

India chipped away at the wickets with Ishant Sharma complementing Jadeja at the other end. The next wicket came from the expensive Umesh Yadav though with Skipper Dwayne Bravo playing an ambitious pull into the hands of deep mid wicket to leave his team struggling at 140 for 5 in 33.1 overs. India were lucky to get the wicket of the explosive Kieron Pollard (22 from 32 with 2 sixes) without much damage as the big man got caught at long on miscuing a big hit off Ishant with Windies at 171 for 7 in the 43rd over. Sunil Narine and Ravi Rampaul threw their wickets to Jadeja. Just when India were all set to bundle out Windies below 200, Darren Sammy swung his bat around to hit 5 fours and 4 sixes to add up some precious runs.

For India, Jadeja recorded career best figures of 10-2-36-5 while R Ashwin did well for his 1 for 36 in 9 overs. Ishant apart from one costly over against Sammy did a good job of keeping it tight.

The second half showed that Sammy’s heroics with the bat weren’t good enough for the heavily talented Indian batting line-up. Openers Rohit Sharma and Shikhar Dhawan sealed the run chase with a stand of 101 runs in just 15.3 overs. While Rohit got out caught down the legside in a flick off Narine after scoring 52 from 56 balls with 7 fours, Dhawan went onto score a second consecutive century. Along with Dinesh Karthik, who scored an unbeaten fifty, Dhawan wrapped up the match in 39.1 overs. India eased to an 8-wicket with Dhawan scoring an unbeaten 102 from 107 balls with 10 fours and a six. Dinesh Karthik scored a cracking 51* from 54 balls with 8 fours.

The only other wicket that India lost apart from Rohit was that of Virat Kohli (22 from 18 balls) who was bowled flicking a Narine delivery right across the line. The Man of the Match award went to Ravindra Jadeja ahead of Dhawan.

Toss and Teams: India have won the toss and asked West Indies to bat first under cloudy conditions at The Oval in London. While the overhead conditions would assist the swing bowlers, the pitch looks dry and has a bit of rough to help the spinners because of the landing from the three Pakistani left-arm pacers in the last match played here. The pitch should be two-paced according to the experts and batting will not be that easy.

India have gone in with an unchanged team that defeated South Africa. West Indies have made one forced change with Dinesh Ramdin out with an ICC suspension. Darren Sammy replaces him in the XI while Johnson Charles doubles up as the Keeper.