Delhi three-match winning streak ended as they went down to Mumbai at the Feroz Shah Kotla on Thursday. Chasing 169 to win

Delhi three-match winning streak ended as they went down to Mumbai at the Feroz Shah Kotla on Thursday. Chasing 169 to win on yet another sluggish pitch, Delhi slumped to 128 for 9 to go down by 40 runs.

Hard-hitting Hardik Pandya it was who once again made the big difference with a blazing 32 from 25 balls. On being adjudged the man of the match, Pandya said he has been hitting the ball really well.

"Even I was telling myself that I don't think I've ever hit the ball better. I have been working hard in the nets and it has been coming off well for me. I like to keep the basics straight, even in the death if you keep your shape and hope for bowlers to miss, you can hit hard," Pandya said. 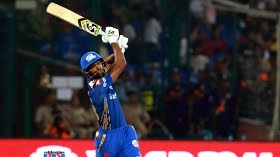 "I am using my brain well, reading the wicket well in this season. I have five more games to go and then the playoffs, and I hope to keep going like this through the season," he added.

Mumbai skipper Rohit Sharma felt 168 was a good score on the board, batting first. "After the first two overs that we played, we thought 140 was the good score. Quinny and I had that talk and then luckily towards the end we had wickets in hand and could use our power-hitters to play just the way they've been playing," he said.

Further, he was all praise for spinner Rahul Chahar, who claimed three wickets. "Rahul Chahar was there with us last year, we wanted to get him in even last year where Mayank was playing.

"He has a good attitude and is clear with what he wants to do. They had left-handers and Rahul was confident to bowl to left-handers, which is what he told me before the innings."

The defeat was Delhi's third in four games at Kotla. They certainly don't seem to enjoy home advantage.