Cheteshwar Pujara returned to the Indian side with an extremely hard-fought century on a tough pitch to make sure India did not collapse on a pitch responsive for bowlers. Pujara's unbeaten 135 and his eight wicket stand of 104 Amit Mishra

Cheteshwar Pujara returned to the Indian side with an extremely hard-fought century on a tough pitch to make sure India did not collapse on a pitch responsive for bowlers. Pujara's unbeaten 135 and his eight wicket stand of 104 Amit Mishra saw India end the day on a competitive 292 for 8. Under normal circumstances, that wouldn't be a great total. But, on a pitch where India lost the toss and got off to a disastrous start, they would be reasonably pleased with the position they got themselves into. With two wickets in hand, and three days to go, India would believe they are comfortably placed. 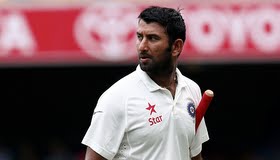 At one stage in the match, it seemed as if India would fold up for under 200. They were in all sorts of trouble at 180 for 7, but Pujara who had held the innings together nicely till then, got great support from Mishra, who, until then, had two half-centuries to his credit. Mishra's innings was a mix of enterprise and a bit of luck. He played a few risky shots which landed away from the fielder. In between though, he also played some well-timed drives and cuts. Mishra proved to be the perfect foil for Pujara, who kept his wicket in tact without much trouble. The partnership began unconvincingly, but by the time it eventually ended, India were closer to 300.

For Pujara, it was really a lease of new life. The last time Pujara scored a hundred was against South Africa at Durban back in 2013. Since then, he had a poor tours of New Zealand, England and Australia, which saw him eventually being dropped from the playing XI. He needed some luck to force his way back into the starting eleven. He got it with both Shikhar Dhawan and Murali Vijay being ruled out of the ongoing series. He was forced to open given that there was no place for him anywhere in the batting order, but Pujara had to ensure that he made use of his god-sent chance, which is exactly what he did.

The pitch was a tough one to bat on for sure, but there was not the kind of movement that troubled him in Australia and England. Still, things were tough for Pujara. He was batting in an uncomfortable position, was under pressure to deliver this being his comeback. Pujara displayed the right technique needed to survive under the conditions. He was circumspect early on, but did not hesitate in driving or cutting when the opportunities arose. This was in stark contrast to Mishra's knock, which was not always controlled as mentioned earlier. The partnership finally ended when Mishra was stumped by Herath for 59.

If you take away that partnership, India did not offer much in the form of resistance. Overnight batsman Virat Kohli did not last long, falling to his tendency of flashing outside the off stump, and being caught behind the wickets. Rohit Sharma, not for the first time in the series, got a start, but could not carry on. Having reached 26, he fell playing a defensive push outside the off stump. Stuart Binny then came in, and was trapped lbw very first ball by Dhammika Prasad. Naman Ojha began impressively on debut, but played a poor slog to be dismissed for 21. And, when Ravichandran Ashwin experienced another batting failure, India were 180 for 7. Pujara and Mishra then turned the tables.

-- By A Cricket Correspondent>