Watson powers Rajasthan Royals to a crushing win over Pune

In what was a one-sided affair at the Subrata Roy Sahara Stadium, hosts Pune Warriros were thrashed by Rajasthan Royals for a 7-wicket win with 22 balls to spare. Needing just the 126 runs to win, Rajasthan Royals eased to the target thanks to a ferocious knock of 90* from 51 balls with 10 fours and 4 sixes. Not a single Pune Warriors’ bowler could stop Watson from running away with the game much to the disappointment of the home crowd. 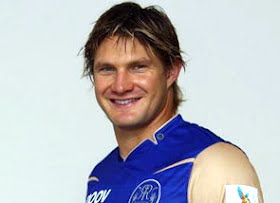 Pune Warriors put up a dull batting show to end up with a weak total of 125 for 6 against Rajasthan Royals. There was never any momentum in the Pune Warriors’ innings and the top score came from Anustup Majumdar who made 30 from 20 balls with a four and 2 sixes.

Shaun Tait was very difficult to score off for Pune Warriors. The express fast bowler conceded only 13 runs in his 4 overs while taking three wickets.

Toss and Teams: Hosts Pune Warriors have won the toss and elected to bat first against Rajasthan Royals. Ashish Nehra replaces Ashok Dinda who is out with an injury. Rajasthan Royals have made one change with Owais Shah coming in for Brad Hodge.