Delhi Daredevils crash to an embarassing defeat against Sunrisers

Delhi Daredevils crashed to an embarrassing defeat against Sunrisers Hyderabad in what was a terribly one-sided affair at the Rajiv Gandhi International Stadium. It was an absolute pity for the paying spectators to watch one side score just 80 runs on the board and the other side laboring to cross the target in a T20 match.

Delhi Daredevils crashed to an embarrassing defeat against Sunrisers Hyderabad in what was a terribly one-sided affair at the Rajiv Gandhi International Stadium. It was an absolute pity for the paying spectators to watch one side score just 80 runs on the board and the other side laboring to cross the target in a T20 match. With this defeat, the Delhi Daredevils can forget about the play offs with 8 losses in 11 matches. For Sunrisers, things are looking rosy with five consecutive wins at home and a total of 7 wins in 11 matches so far.

Delhi’s trouble began in the 4th over when Skipper Mahela Jaywaradene was adjudged lbw to an Ishant Sharma delivery. Runs were just not coming at a good pace for the visitors and Virender Sehwag couldn’t repair the situation as he got bowled off Sammy in the 8th over in an attempted late cut. Sehwag struggled to score 8 from 17 balls while leaving his side at 32 for 2. 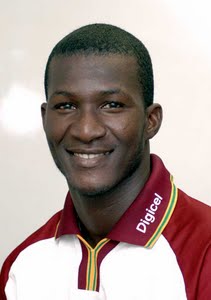 The Sunrisers kept on taking important wickets – one of them was that of David Warner in the 12th over with the left-hander stumped out by an Amit Mishra googly. Delhi at this stage were 52 for 4 and none of the remaining players including the international performers like Irfan Pathan and Johan Botha could do anything significant to rescue their team.

Delhi Daredevils folded to 80 all out in 19.1 overs with the trio of Dale Steyn, Thisara Perera and Darren Sammy taking two wickets each. In fact, all the six bowlers used by Sangakkara got amongst the wickets.

Shikhar Dhawan looked fluent in the run chase scoring 22 from 16 balls before he was given out lbw trying to pull an arm ball from Botha. The homeside stuttered slightly losing three more wickets but at the same time chipped away at the target. In the end, Darren Sammy with an unbeaten 18 from 20 balls took the hosts home with 37 balls to spare in a 6-wicket win. Batting wasn’t all that easy as the ball was turning and it needed some careful approach from the Sunrisers to get to the target. Sammy for his little but effective all-round performance got the Man of the Match award.

Toss and Teams: Delhi Daredevils have won the toss and elected to bat first against hosts Sunrisers Hyderabad at the Rajiv Gandhi International Stadium.