Chennai down Mumbai to enter IPL Final for the fifth time

Chennai Super Kings have entered into the Final of the Indian Premier League for the fifth time in six years. Tonight they beat Mumbai Indians by a huge margin of 48 runs in Qualifier 1 at the Feroz Shah Kotla. All is not over yet for the Mumbai Indians who will play in Qualifier 2 on the 24th against the Eliminator Winner.

Chennai Super Kings have entered into the Final of the Indian Premier League for the fifth time in six years. Tonight they beat Mumbai Indians by a huge margin of 48 runs in Qualifier 1 at the Feroz Shah Kotla. All is not over yet for the Mumbai Indians who will play in Qualifier 2 on the 24th against the Eliminator Winner.

The match was set up nicely by a huge 140-run stand for the 2nd wicket between the in-form Michael Hussey and Suresh Raina. Hussey scored an unbeaten 86 from 58 balls with 10 fours and 2 sixes to get the Orange Cap. Suresh Raina was the more explosive of the two scoring his fifty in 29 balls and finishing with 82* from 42 balls with 5 fours and 5 sixes. The only wicket to fall in the CSK innings was that of Murali Vijay who batted well for a 20-ball 23. Chennai Super Kings piled up 192 for 1. 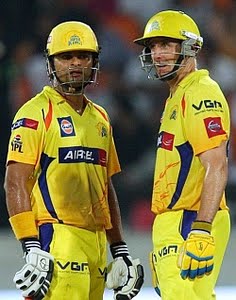 It was a poor day in the office for the two overseas speedsters – Mitchell Johnson and Lasith Malinga with both of them conceding more than 40 runs in their four overs. Harbhajan Singh was the only Mumbai bowler who held his own with his 0 for 26 in 4 overs.

The pitch was absolutely flat and the outfield was dead quick. However, CSK got just too many runs on the board. Mumbai Indians lost an early wicket but an insignificant one of Aditya Tare. Their innings got going with Dwayne Smith playing in an explosive fashion to score a fifty in just 21 balls to seriously threaten the CSK party. Smith couldn’t last enough distance though and perished in the 9th over slicing a Jadeja delivery to covers. The West Indian scored 68 from 26 balls with 6 fours and 5 sixes to leave Mumbai Indians at 87 for 2.

Mumbai had a mini collapse after Smith’s exit with Dinesh Karthik and Rohit Sharma falling in the space of 9 balls. Karthik was lbw to Jadeja missing a sweep while Rohit smacked a Chris Morris delivery into the hands of long off to leave his side at 101 for 4 in 12 overs. Kieron Pollard raises hopes of a revival with a couple of big sixes but got out flicking Jadeja into the hands of backward squareleg. Pollard finished with a cameo of 24 from 16 balls and his departure meant curtains for the Mumbai Indians at 127 for 5 in 14.5 overs.

Mumbai collapsed to 144 all out in 18.4 overs thanks to some great catching from the Chennai Super Kings. Jadeja and Bravo picked up three wickets each and the latter got back his purple cap. The Man of the Match went to Michael Hussey instead of Suresh Raina.

Toss and Teams: Chennai Super Kings have won the toss and elected to bat first against the Mumbai Indians at the Feroz Shah Kotla in Delhi in Qualifer 1 of IPL 6. The winner of this match will enter the Final while the loser will play in Qualifier 2.

Mumbai Indians have surprisingly made four changes with Dwayne Smith, Munaf Patel, Pragyan Ojha and Johnson coming in for Maxwell, Coulter-Nile, Dhawal Kulkarni and Rishi Dhawan. Sachin Tendulkar is still not fit according to Skipper Rohit Sharma. CSK have made just the one change with Albie Morkel taking the place of Jason Holder.