Breaking news emerging this morning is that three Rajasthan Royals players have been arrested by the Delhi Police on spot-fixing charges in the ongoing IPL. The biggest name is S Sreesanth who is now in deep trouble of ending his India career following this scandal.

Breaking news emerging this morning is that three Rajasthan Royals players have been arrested by the Delhi Police on spot-fixing charges in the ongoing IPL. The biggest name is S Sreesanth who is now in deep trouble of ending his India career following this scandal. The Delhi Police have also arrested some bookies along with the players. The cops are saying that they have recorded conversations which include the voices of Sreesanth, off-spinner Ajit Chandila and left-arm spinner Ankeet Chavan.

The arrests took place around 2:30 AM with the three players picked up by the police at different spots. All the three were then flown with the cops to New Delhi. 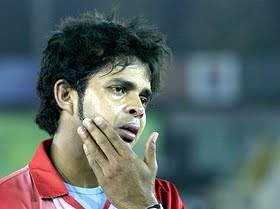 News is that there was spot fixing in yesterday’s Mumbai Vs Rajasthan match along with some previous games. This will be a huge blow to the credibility of the IPL which many people have been looking at suspicion since its inception.

Update: The Delhi Police who have come up with this explosive revelation of spot-fixing in the IPL have explained quite a lot of details this afternoon to the media. The basic summary is that Sreesanth seems to be the leader of this fixing ring amongst the players. A link to the Mumbai Underworld and the D-company run by Dawood Ibrahim has also come out with the Police tracking quite a lot of calls from Pakistan.

The Cops have explained how the three players had carried out the instructions of the bookies. For instance, the bowler who had agreed to take part in the spot-fixing would give indications by putting on a towel in his waist, tie his shoe laces, kiss his locket and do other acts just to confirm that he going to deliver exactly what was asked to earlier. The cops had presented visuals from the matches in which the players had implemented the bookies’ instructions.

According to the Delhi Police, atleast three matches played by the Rajasthan Royals were affected by spot-fixing. The first match was on May 5 against Pune Warriors in which Ajit Chandila had on purpose given away more than 13 runs in an over by bowling atleast three bad balls. The second match was on May 9 against the Kings XI Punjab which involved Sreesanth bowling a bad over. Sreesanth who didn’t have a towel during his first spell had got one out of nowhere before bowling what was a fixed over. The third match that was spot-fixed was yesterday’s contest against the Mumbai Indians in which left-arm spinner Ankeet Chavan bowled a good first over which hardly went for any runs and in his second over gifted the batsmen with many runs.

Another revelation was that one of the bookies was Sreesanth’s relative Jiju Janardhan who is also a cricketer. The Delhi Police claim that for just one over of bowling according to the bookies’ instructions, the players would get something like 40-60 lakhs Rupees.