India consolidated their position on day two of the second Test, at Kingston, Jamaica, courtesy a hundred by opener Lokesh Rahul. The batsman, who resumed at the overnight score of 75 not out, doubled his score and eventually finished on a career-best 158

India consolidated their position on day two of the second Test, at Kingston, Jamaica, courtesy a hundred by opener Lokesh Rahul. The batsman, who resumed at the overnight score of 75 not out, doubled his score and eventually finished on a career-best 158, as India finished the day on a strong 357 for 5, the lead already a healthy 162. While Rahul led the innings for the team, support came in the form of three 40s, from Cheteshwar Pujara, skipper Virat Kohli and Ajinkya Rahane, whose unbeaten knock took the lead past the 150 mark.

Rahul, the hero of the day, played an assured knock. He was slow in the beginning when the fast bowlers tested his patience, keeping the ball outside the off-stump. Rahul, who was in the playing eleven, only because regular opener Murali Vijay was injured, ensured he did not make a mistake. As the game progressed, West Indies' bowlers expectedly loosened, and Rahul took advantage of the same. He drove with conviction, and punished the bowlers when the ball was there to be hit. Although a bit jittery in the 90s, he got to three figures by charging down the track and lofting Roston Chase for six.

While Rahul excelled, Pujara lost an opportunity to do so. He was involved in a long partnership with Rahul, but the runs did not come as freely as they should have, especially after Pujara had got his eye in. It is clear that the Indian number three is under pressure since he hasn't scored a lot of runs apart from that quality hundred in Sri Lanka last year. But, the nervousness got the better of him at Jamaica, four short of what would have been an extremely hard fought fifty. Pujara has only himself to blame for the dismissal. He nudged a short delivery from Jason Holder into the leg side, and set off for a single, only to be caught short of the crease.

Skipper Kohli had a horror tour here where he made his Test debut five years back. And, there were hints of the same here, as the impressive Shannon Gabriel gave the Indian captain a working over. Kohli, usually aggressive at the start, couldn't get off the blocks this time, constantly troubled by Gabriel's outswingers. At one point, he was on 8 from 33, and there was also a huge lbw shout against him, as ball came back in, and rapped him on the pads. But, he somehow survived, thanks to the height. Kohli began to get into the groove after that, but could not go on to make the big score, which would disappoint him. 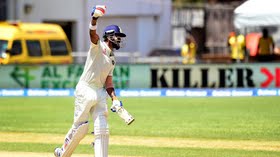 India lost Kohli in the last session, and Ravichandran Ashwin, who again batted higher than his usual position, had a rare failure with the bat against West Indies. India needed to wrest back some control getting into the close of play, even though they were ahead. As it often happens in such situations, Rahane was there. The middle-order bat, who did not have much to do in the previous Test, batted with fluency, and made sure India's lead extended from good to great. On day three, his target will be to reach three figures, and try to ensure a lead, owing to which India do not need to bat again.