Sachin and Zaheer in Ranji… It was about time

There is some real good news for fans of Mumbai cricket. Two biggies from the international scene – Sachin Tendulkar and Zaheer Khan – will be available for Mumbai’s first clash against Railways at the Wankhede Stadium beginning early next month.

There is some real good news for fans of Mumbai cricket. Two biggies from the international scene – Sachin Tendulkar and Zaheer Khan – will be available for Mumbai’s first clash against Railways at the Wankhede Stadium beginning early next month. Considering the poor performances of the stalwart duo in the last year or so, their decision to play domestic cricket is absolutely spot on. They haven’t looked anywhere near their best in recent times, and although one match wouldn’t make much of a difference, it they can help Mumbai in overcoming Railways, it would definitely boost their confidence ahead of the England series.

It is no secret that Tendulkar and Khan’s lack of form is a real worry for Team India. The management may be downplaying the situation, stating that both are great players and that it is only a matter of time before they get their act together again. However, such a callous attitude will only hurt Team India in the long run. The problemwith the Mumbai duo is not just the lack of match-winning performances, but also the manner of their struggle, which hints towards the fact that both are very much on the last legs of their international career. 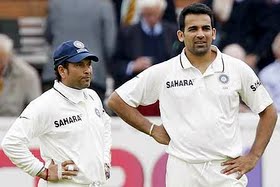 Even ignoring the fact that Tendulkar has got only one international hundred since the 2011 World Cup, his batting has been otherwise scratchy. But for one innings during last year’s disastrous tour to England, when the maestro looked at his fluent best and almost got that elusive hundred, Tendulkar has been nowhere near his fluent self. Similarly, Khan hasn’t been the same force he was prior to India’s World Cup winning campaign. His fitness has been a bigger concern than his on-field performances. The England tour ended for the left-arm seamer even before it began as he limped off the field within half an hour of the opening Test, raising serious about his fitness regime. He performed better in Australia, but still wasn’t anywhere near his best.

One domestic game won’t make a hell of a lot of difference, but it will have a couple of positives without doubt. Firstly, the duo can play in a less-pressure situation and against a side that doesn’t have quality players in terms of international standards. It will give them an opportunity to get used to home conditions once again, having played away for so often. Even though New Zealand were here sometime back, that wasn’t a long series, and Indians couldn’t test themselves much.

Another good thing that Tendulkar and Zaheer’s presence will do is generate some much needed interest in domestic cricket. With big guns staying away due to national duty and domestic T20s, Ranji and other first-class tournaments haven’t generated much fan-following. Hopefully, the crowds would pour into Wankhede to see their favourite heroes in action playing for their home team. It has been a long time since Mumbai have fielded such a high-profile side. Look at it anyway, domestic cricket will be the winner.