Having been outsmarted in the opening ODI of the five-match series at Colombo, Sri Lanka will be keen to fight back when they take on Australia in the second one-dayer at the same venue on Wednesday.

Having been outsmarted in the opening ODI of the five-match series at Colombo, Sri Lanka will be keen to fight back when they take on Australia in the second one-dayer at the same venue on Wednesday. Sri Lanka suffered in the opening match because they could not put up a challenging score on the board batting first. The lack of runs, in the end, made a big difference as Sri Lanka's bowlers did not have enough to bowl at. Australia, on the other hand, will be extremely pleased with their bowling effort in particular in the opening match. As for their batting, there is still scope for improvement.

Sri Lanka will be looking forward to their batsmen to contribute as they head into the second match. Dinesh Chandimal batted well in the last game to end up as the top run-scorer. But, as mentioned earlier as well, he needs to work really hard on his strike rate. He was too slow for the team's liking, and managing only three boundaries is an unacceptable stat, considering he batted on till the end. Kusal Mendis also batted well in the company of Chandimal, and it was only thanks to the duo that Sri Lanka managed to finish with a somewhat decent score. The two will be hopeful of continuing their good form.

This series will be extremely critical for Tillakaratne Dilshan. He is approaching the fag end of a memorable career, and every failure will be gauged closely. It must be remembered that Dilshan missed the England series due to some personal reasons, and was not in great form prior to that as well. The continued poor run of Kusal Perera will also worry the hosts. They would be wondering whether to bring in Danushka Gunathilaka at the top. Runs would also be expected from skipper Angelo Mathews. In the bowling, apart from Dilruwan Perera, no one shone in the first match, so they will be keen to change that as well.

Australia will be heaving a sigh of relief following the victory at Colombo. After the thrashing in the Test series, their morale would have been down for sure. But, the inclusion of fresh legs definitely aided their cause. Their bowling on the day was particularly brilliant. Left-arm seamer Mitchell Starc continued from where he left off in the Tests. His three scalps ensured he created a record for the fastest bowler to reach 100 one-day wickets. James Faulkner also shone as the one-day specialist proving his worth to the team. However, the others weren't as impressive so Australia might be pondering on changes. 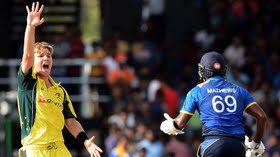 In the batting, Australia were guided by well-compiled half-centuries from Aaron Finch, another ODI specialist, and skipper Steven Smith. George Bailey, another player, who is not part of Australia's Test plans, also chipped in with 39. As such, the Aussies would be pleased with the way they batted. But, the manner in which they collapsed towards the end reiterated that there are still weaknesses that Sri Lanka could exploit. Someone like a Moises Henriques will be under big pressure to keep his place in the side, after another failure on tour. Sri Lanka will look to exploit these very loopholes of the visitors.