Heavily built Fast bowler Dilhara Fernando has been named in the Sri Lankan Squad for the Second Test at the Sinhalese Sports Club in Colombo.

Heavily built Fast bowler Dilhara Fernando has been named in the Sri Lankan Squad for the Second Test at the Sinhalese Sports Club in Colombo. Dilhara comes in for left-arm pacer Chanaka Welegedera, who missed the First Test because of a shoulder strain. Subsequent scans revealed that Welegedera had a tear in his shoulder which would rule him out of the entire Test Series.

Dilhara Fernando, who replaces Welegedera, could play in the Second Test Match to partner Nuwan Kulasekara. Rookie fast bowler Nuwan Pradeep was the second pacer of the Sri Lankan team in the first Test in which he contribute just the one wicket. Pradeep’s place could go to the much experienced Dilhara Fernando. 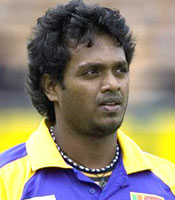