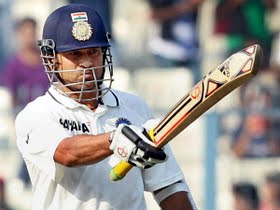 Pitch report : Eden Gardens' chief groundsman, Prabir Mukherjee, has promised "a good, firm, even-bouncing wicket" but a day before the game, Sammy said it already "looks like a fourth-day pitch". While Mukherjee and Dhoni aren't exactly friends, it is Sammy's verdict that may excite the India captain, who has said in the past he wants Indian Test pitches to turn from day one. Peak temperature is expected to hover around 30 C. No rain is expected during the match, but the moisture previous downpours have left behind in the soil may slow down the pitch.
Darren Sammy and his men will take a look at the farewell euphoria in Kolkata and wonder if there's some karmic connection between West Indies and Sachin Tendulkar. 'When will he get his 100th international hundred?' was the refrain the last time West Indies toured India in late 2011. Tendulkar came close twice in that three-Test series, making 76 in a successful chase in Delhi and falling six runs short of the mark to the disappointment of hometown Mumbai.
That Wankhede match was only the second time a Test had been drawn with the scores level, India managing a single off the last ball of the game when two were needed. West Indies may have lost that 2011 series 0-2, but they had a 100-plus first-innings lead in Delhi which they blew, and were a wicket away from a win at the end in Mumbai.
It is important to revisit all this to remind ourselves that two teams played cricket - exciting cricket - then, during that long clamour for the landmark. And, regardless of how or why this series came to be, two teams are going to play cricket now, during the retirement.
Ball by ball updates
Full Scorecard
Last Five Match Result :
India WWWWD (last five games, most recent first)

West Indies have won their last six Tests, two each against Zimbabwe, Bangladesh and New Zealand