Only 15 overs were possible on the opening day of the deciding Test between India and Sri Lanka at Colombo. During this time, India lost two wickets for the addition of 50 runs, while Sri Lanka created plenty more opportunities.

Only 15 overs were possible on the opening day of the deciding Test between India and Sri Lanka at Colombo. During this time, India lost two wickets for the addition of 50 runs, while Sri Lanka created plenty more opportunities. They were unlucky that some edges fell tantalisingly close. At the same time, they could have done with better catching. As things stood after play was officially called off, Cheteshwar Pujara was unbeaten on 19, and Virat Kohli on 14, both surving nervy times on a grassy surface. The heavy rains came in just an hour into the day's play. Lunch was taken early, and there was no play even till tea time. Eventually, umpired decided to call off play. 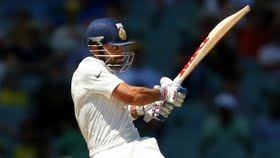 Before the rain played spoilsport, Angelo Mathews won the toss, and asked his bowlers to make use of the bowler-friendly conditions. It did not take long for the bowlers to respond to the captain's call. After an assured couple first ball, Lokesh Rahul shouldered the second ball of the match from Dhammika Prasad. The ball swung in, and destroyed the opener's stumps. Once again, Ajinkya Rahane was sent in at number three. Unlike the last game, he began with greater confidence this time. He began by playing what seemed like a defensive chip, which somehow reached the boundary. His next four was much more controlled as he drove down the ground. But, the question marks regarding having him at number three will be raised again, after Nuwan Pradeep beat his in movement, and trapped him lbw.

Skipper Kohli was in early once again. He could have been back in the hut for 8, had Kusal Perera, keeping in place of Dinesh Chandimal, grabbed a simple chance behind the stumps. Kohli's tendency of flashing outside off got him into trouble as Pradeep induced an inside edge. Perera could not take the catch to his left. He was also to concede five runs to the Indians, allowing a ball to come in contact with the helmet. Both Kohli and Pujara edged deliveries which did not carry. The latter did play an expansive drive to get some confidence.Kohli and Pujara had added 34 for the third wicket when the rains came down, and disallowed any further play.