Karthik explains angry team talk: Had to let the boys know what I thought

Openers Shubman Gill and Chris Lynn starred for Kolkata as they overcame Punjab challenge by seven wickets at Chandigarh to keep their hopes alive in the tournament.

Openers Shubman Gill and Chris Lynn starred for Kolkata as they overcame Punjab challenge by seven wickets at Chandigarh to keep their hopes alive in the tournament. Set 184 to chase, Gill made an unbeaten 65 from 49 balls while Lynn blasted 46 from 22 deliveries.

Earlier, Punjab recovered from a poor start to post a challenging 183 thanks to quickfire knocks from Nicholas Pooran and Sam Curran who made 48 from 27 and 55 from 24 respectively. However, the brilliant opening stand between Gill and Lynn undid all their great work.

Speaking after winning the man of the match, an elated Gill said, "Feels big, MOTM award in my home ground. It was important to build partnerships. When I was batting 80-90 strike rate the team was doing well. That's when I decided to bat till the end.

"My whole family was there, even some relatives from the village. It was good to play here. I'm still trying to figure out my game in T20s," he went on to say. Kolkata skipper termed the win as a 'live another day' moment. He also openly spoke about the obvious issues in the team and the angry team talk he gave them. 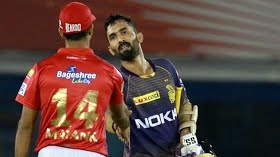 "I wasn't happy with the body language. The kind of things I didn't expect from them. I'm not too into the results, just the processes. So I had to let the boys know what I thought. I think it's a bit rare. I should be true to myself. If I show that and it gets the best out of them, so be it," Karthik explained.

"In the last over, we gave ten runs too many. But gotta give credit to Curran. At the end of the day the Indian T20 Cricket beauty is that all teams have good balance and someone is always coming up here and there," Karthik further said. He also termed Gill a terrific player. "It was only fair we gave him a run at the top of the order. He'd been looking for it," added Gill.

Punjab has been all but knocked out following the loss. Their skipper Ravichandran Ashwin said they had a par score but the wicket was too good on that day. "Generally we've defended scores like this, but it was a good track today. It was one of those things. It can go the other way. We bowled well in the first three overs but Lynny took it away from us. Positives for us with respect to Pooran and Sam" explained Ashwin.