India are six wickets away from winning the Lord’s test after a fantastic last session under gloomy conditions.

India are six wickets away from winning the Lord’s test after a fantastic last session under gloomy conditions. Only weather can save England on the final day as the target is still 214 runs to get with not much of batting left.

There was a solid partnership building between Cook and Ballance after Tea which was broken by Mohammed Shami. A reversing outswinger from Shami had Ballance (27) edging it behind to end a 58-run stand. Ian Bell had a very short stay at the crease as he was cleaned up by an Ishant Sharma delivery that stayed low to go through his defences.

Very soon, Alastair Cook (27) too perished as he edged an Ishant outswinger to Dhoni leaving England in a losing position at 72 for 4. By stumps, England have Joe Root (14*) and Moeen Ali (15*) surviving in tough batting conditions. The hosts closed the day at 105 for 4 in 46 overs. 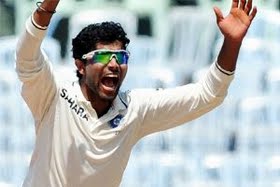 One of the most interesting moments of the final session was MS Dhoni standing back to Jadeja when he was bowling to the left-handers.

Update at Tea on Day 4: India are on top at Lord’s as Jadeja fresh from a crucial fifty went on to remove Sam Robson with an arm ball in his very first over. At Tea, England are 18 for 1 on a pitch that is completely favouring the bowlers with its uneven bounce.

Earlier, Ravindra Jadeja and Bhuvneshwar Kumar too the Indian lead past 300 with their terrific half centuries. Jadeja was eventually dismissed for 68 (from 57 balls with 9 fours) when his top edged pull off Stokes was caught by the backward running Cook from slip.

Jadeja’s stand with Bhuvneshwar was worth 99 runs which could be the match-winning factor for India. England managed to take the remaining two wickets without much fuss. Bhuvneshwar Kumar was last man out when he was caught in the slips off Stokes but note before contributing 52 to India’s second innings total of 342. England’s target is 319 on a difficult pitch for batting.

Update at Lunch on Day 4: Under gloomy conditions at Lord’s, India has gradually built its advantage by stretching its lead to 243 runs with still three wickets in hand. Ravindra Jadeja has turned out to be the unlikely hero with an unbeaten cameo of 37 from 30 balls which could change the match in India’s favour. Bhuvneshwar Kumar is giving him solid support with his 13*.

England’s much needed opening on Day 4 came when Plunektt got MS Dhoni caught for 19 at slip off a bouncy ball. Stuart Binny threw his wicket away as he tried to loft Moeen Ali for a six but only to get caught by the backward running Cook at mid off.

The knockout punch for England came from Anderson with the second new ball as Murali Vijay for once poked away from his body to edge an outswinger to miss out on a century. Vijay finished with 95 while batting out 247 balls! India’s lead was 211 when Jadeja and Bhuvneshwar got together. Jadeja took the initiative with some attacking shots to boost the Indian lead.