Five Lankan men who could make the difference

Another Indian tour of Sri Lanka is all set to get underway. And, like always, there is hardly anything to pick between the two teams. India and Sri Lanka have played each other so often in the last couple of years that the players from the two teams know each other inside out. 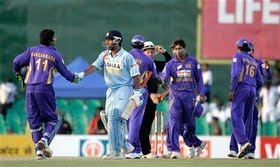 Tillakaratne Dilshan: The Lankan opener has an excellent record against India, especially in sub-continent conditions. If he can play big knocks at the start of the series, it will give Lanka a distinct advantage. The plus point with Dilshan is that when he scores runs, he does them at a fast rate, as a result of which there isn’t much pressure on the latter batsmen to up the run rate. On the contrary, twice Dilshan has scored 160 against India, and on both occasions Lanka have lost. This is something the opener would be keen to improve on.

Lasith Malinga: The slinger from Lanka gave India a major threat during the 2011 World Cup final, dismissing Sachin Tendulkar and Virender Sehwag cheaply. India managed to win easily on that occasion. However, Malinga has the ability to run through sides. India would be rusty following a seven-week break, and none can exploit this opening better than the Lankan fast bowler.

Angelo Mathews: These days, the Lankans find it extremely difficult to win without significant contributions from their star all-rounder. Mathews has been exceptional with the bat, guiding the team home under pressure, during a number of tense chases. With the ball has well, he has been consistently effective without being outstanding. India will have to deal with Mathews in a very careful manner, else he could take matches away from the visitors.

Thisara Perera: Another all-rounder, Perera has risen tremendously in the last year or so. Against Pakistan, he was brilliant with both the bat and ball, and also made a mark during the lone Test he played. Perera is an extremely dangerous batsman towards the end of the innings, who can play the crucial, quick cameos at will. With the ball, he does just about enough to trouble the batsmen. Perera has had success against India in the past especially with the bat, which should encourage him.

Rangana Herath: Spinners don’t trouble India, but Herath has tasted success in the recent past, and that will give him confidence as he heads into the series against India. Remember Ajantha Mendis seriously troubled Indian batsmen four years back, and though Herath doesn’t have any mystery balls up his sleeve, India cannot him lightly for he is an industrious bowler, who will pounce on any possible opportunity provided.