Chennai Super Kings won a last ball thriller against a spirited Rajasthan Royals at the MA Chidambaram Stadium. CSK needing two runs to win from the final ball got home thanks to Captain Cool MS Dhoni (15* from 12 balls with a four) along with Dwayne Bravo (16* from 10 balls with a fours). 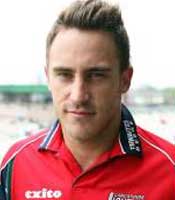 The hosts looked to be in control chasing the target of 147 with Faf du Plessis impressing again with a classy half century. Today he scored 73 from 52 balls with 6 fours and 2 sixes. But when he got out, CSK lost a bit of momentum and the match was dragged till the final ball. Brad Hogg pegged back the CSK batsmen with figures of 1 for 18 in 4 overs. Faf du Plessis got the Man of the Match for setting up the 7-wicket win for CSK.

Rajasthan Royals have been restricted to a modest total of 146 for 4 on a slow dry pitch at the MA Chidambaram Stadium in Chepauk. Owais Shah was the top scorer for Rajasthan Royals with his 52. Shah took 43 balls to score his runs while striking 4 fours and 3 sixes. He got good support from Ashok Menaria who scored 36 from 34 balls with 2 fours and a six.

Toss and Teams: Rajasthan Royals have won the toss and elected to bat first against hosts Chennai Super Kings in the 26th Match of the IPL 5 at the MA Chidambaram Stadium. Kevon Cooper comes back into the Rajasthan Royals’ team taking the place of Johan Botha. CSK have gone in with the same XI that played the last match.