BAN vs PAK 2nd Test Live Scores: After an impressive first day, Pakistan dominated day two of the Test against Bangladesh at Mirpur in Dhaka.

After an impressive first day, Pakistan dominated day two of the Test against Bangladesh at Mirpur in Dhaka. Azhar Ali resumes his innings from where he had left off on the opening day, and continued his impressive show. He went on to complete his maiden double hundred, and was well supported by Asad Shafiq, who came up with a hundred of his own. Thanks to the duo, Pakistan easily crossed the 500 mark and declared at tea, having made an imposing 557 for 8. In response, Bangladesh crumbled to 107 for 5, with Junaid Khan and Yasir Shah claiming two wickets apiece, leaving the hosts precariously placed. 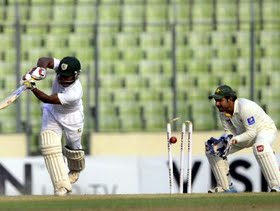 Having lost their skipper Misbah-ul-Haq very early in the day, Azhar and Asad were content playing defensive cricket. To be honest, they were forced into their shell by Mohammad Shahid, who kept things extremely tight, and rarely bowled a loose ball. At the same time, Pakistan's batsmen must be credited for not throwing their wickets away. While Shahid was impressive, he did not quite extract the same kind of moment that he gained on the first day. He was bowling more in the hope of the batsmen making a mistake. Once, they had seen through Shahid's spell, they had it all easy against the mediocre Soumya Sarkar and the spinners.

Post lunch, both Azhar and Asad opened up. With nothing much in the pitch for the fast bowlers (and Shahadat Hossain unavailable), Bangladesh turned to its spinners, but even they could not deliver. In fact, both Azhar and Asad constantly danced down the pitch to the slow bowlers, and hit them for boundaries with ease. Shakib Al Hasan may have dismissed Misbah very early in the day, but that was to be his lone success in the day. Taijul Islam picked up three wickets, but conceded many for the same, and Shugavata Hom wasn't highly impressive either, getting wickets when Pakistan were well in control.

It wouldn't be wrong to say that Azhar and Asad bullied the Bangladesh spinners. Azhar had a close shave on 199, when a delivery missed his stumps by a whisper. But, he immediately got over it by lofting one into the sightscreen to complete his double hundred. At the other end, Asad also crossed a well-deserved hundred by milking a couple of singles. The alliance between Azhar and Asad was worth over 200. Both were dismissed going for big hits. Azhar perished to Hom at long off, having made 226 off 428 balls. Asad also went in a similar manner to the same bowler. He made 107 from 167 balls, as Pakistan pushed for a declaration.

Pakistan's bowlers went on to cap a perfect day for the visitors. Junaid Khan trapped Tamim Iqbal lbw with a brilliant incoming delivery. Iqbal reviewed the decision, but to no avail. Mominul Haque then edged the bowler behind the stumps, after struggling his way to 13.

Meanwhile, Imrul Kayes, who was looking good, was lured into a false stroke by Yasir Shah. He beat Imrul's drive with some dip, and had him bowled. Yasir got one more wicket, when he fooled Mushfiqur Rahim with a googly in the last over of the day. At the other end, Wahab Riaz bounced out Mahmudullah. At 107 for 5, Bangladesh are looking at another massive rescue act ala Khulna.