Cricket World Cup, 5th Match, Pool B Ireland vs West Indies: Ireland pull away with a famous victory, winning this one by four wickets.

Cricket World Cup, 5th Match, Pool B Ireland vs West Indies: Ireland pull away with a famous victory, winning this one by four wickets. Today Ireland is playing as a champion team.

This was not the first occasion when Ireland beat a big side in such kind of big event. Ireland defeated Pakistan and England in previous world cups. In 2007 ICC world cup Irish team beat Pakistan by 3 wickets whereas in 2011 world cup Ireland registered win against England. They beat English side by 3 wickets while chasing 327 score. So this is their second successful chase of 300 plus score in world cup. 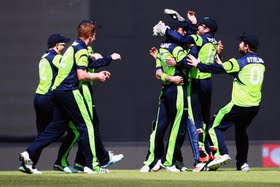 William Porterfield: It is obviously fantastic to win. This sets us up nicely for the next few games. Belief has been growing within the squad for a long time and we know what we are capable of, not just in this game but the other games in the competition as well. 300 was probably about par as we knew the pitch was good with a very quick outfield, so we felt it was well within grasp. Stirling and Joyce kicked on beautifully for us before Niall finished off the chase.

Jason Holder: It was a tough loss and obviously putting up 300 should have been enough, but it wasn't today. We tried to be better with our bowling at the Powerplay and the death overs, but we weren't able to pull them back. I think we just need to be a bit more precise when we set fields. We are just giving away too many boundaries during the middle overs

The Man of the Match is Paul Stirling for his valuable 92 at the outset to set this up for Ireland.