Amidst all the talk about pitches being unfair for batting, India proved on day two at the Feroz Shah Kotla in Delhi that it was possible to do well with the willow even on spinning surfaces, if only batsmen applied themselves

Amidst all the talk about pitches being unfair for batting, India proved on day two at the Feroz Shah Kotla in Delhi that it was possible to do well with the willow even on spinning surfaces, if only batsmen applied themselves. And so, Ajinkya Rahane went on to complete his first Test century at home, and Ravichandran Ashwin yet demonstrated his worth with the bat, raising up another fifty as India built up an impressive first-innings total. Ravindra Jadeja then continued his dominance over the Proteas batsmen with another five-four as South Africa collapsed to 121 all out by stumps.

South Africa had their highest opening stand of the series, but it was only worth 36, and was broken when Umesh Yadav got the angles right, and had Dean Elgar caught behind. This was followed by a procession of wickets as South Africa once again failed to give a good account on themselves on what was nowhere as dangerous a pitch as the one at Nagpur. It was a sense of déjà vu all over as AB de Villiers single-handedly kept the fight alive for the visitors. He was ninth man out for 42, as he tried to hit out against Jadeja. But, Ishant Sharma took a smart catch on the boundary. The horror tour continued for Hashim Amla and Faf du Plessis as they again fell to spinning deliveries from Jadeja.

Earlier, Rahane continued from where he left off on the previous day, and India's fightback, which began post lunch on Thursday, only assumed dangerous proportions. Rahane and the other overnight batsman Ashwin extended their partnership to 98 as India gained the ascendancy. Rahane, who has a taildenderish record in home Tests, made amends by completing a sparkling century. He reached the milestone by punching Abbott down the ground for a four. Rahane was aggressive from the start, and went on the attack against the spinners. He hit Dane Peidt for two sixes in one over, and took on Elgar successfully as well.

The eighth-wicket partnership looked set to cross the hundred mark when Rahane was caught off Imran Tahir for a wonderful 127, failing to get the desired elevation on a lofted cover drive. But, if South Africa thought they could now run through the tail, they were mistaken. Ashwin grew in confidence in the company of Rahane and went on to register another Test fifty. He was in such good form that he brought up his half-century with a lofted six down the ground off Tahir, who had a forgettable first innings. Skipper Amla also did not display a lot of confidence in him, using him sparingly. As for Ashwin, he had preceded the six with three crunchy boundaries. 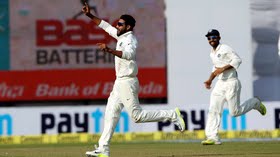 Even as Ashwin batted well, South Africa would rue another poor day in the field. As if his batting and captaincy woes were not enough, Amla dropped his third catch of the match. Abott got Ashwin to edge one early in the day, but Amla grassed the tough one, taking the ball on the rebound. Abbott continued to work hard though, and was rewarded with a five-for as he finished off the Indian innings quickly after lunch. Having completed his half-century, Ashwin miscued a pull, and found himself walking back to the pavilion. Abbott soon trapped Ishant Sharma lbw to finish with 5 for 40 as India ended on 334, a commendable comeback after being 139 for 6 at one stage.