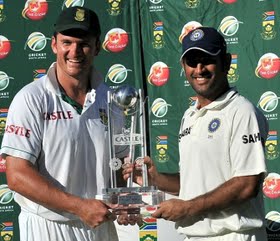 Pitch report : The Wanderers groundsman has promised a typical Johannesburg surface, which will facilitate bounce and carry but also have plenty of runs. Graeme Smith was happy with what he saw the day before the Test. "There's moisture in this wicket and cracks are looking good," he said. The persistent rain that fell over the Highveld throughout last week has mostly dried up but thundershowers are expected every day of the game. Thursday looks like it could be the wettest.

The series against Pakistan in the UAE this year was Jacques Kallis' poorest since his debut in 1995. He failed to get into double figures and did not take a wicket. Kallis' last century was in Brisbane in November 2012, and though he is not under pressure to retain his place, he will want to perform. Apart from scoring runs, Kallis will have an important role to play with the ball on a pitch that should have some assistance for the fast bowlers.
There are few bigger mantles in cricket to take on than being Sachin Tendulkar's successor at No. 4 in India's batting order, and that responsibility belongs to Virat Kohli. South Africa's bowlers have identified him as one of the most dangerous batsmen in India's line-up and he is also their most experienced, in terms of Test caps, in the top six. Kohli has had tremendous success in limited-overs matches this year and the time has come for him to have a similar impact in the longer format.

Full Scorecard
Last Five Match Result :
South Africa WLWWW
India WWWWW
Match Stats : The last time South Africa lost a Test at home was in December 2011, against Sri Lanka. They have won all six Tests since.
There has not been a drawn Test in Johannesburg since December 2000, when the New Zealand - South Africa Test was ruined by rain. The last 12 matches at the Wanderers have had results.
Vernon Philander is five wickets away from 100 Test wickets. If he gets there at the Wanderers, he will be the joint sixth fastest bowler to do so. For India, Zaheer Khan is five away from 300 wickets.
MS Dhoni is the only member of the India's top seven to have played more than 20 Tests. The Johannesburg Test will be his 50th as captain.
Teams:
South Africa team: GC Smith, AN Petersen, HM Amla, JH Kallis, AB de Villiers, JP Duminy, Faf du Plessis, RJ Peterson, VD Philander, DW Steyn, M Morkel, TL Tsolekile, Imran Tahir
India team: S Dhawan, M Vijay, M Vijay, CA Pujara, V Kohli, RG Sharma, MS Dhoni, RA Jadeja, R Ashwin, B Kumar, Z Khan, Shami Ahmed, I Sharma, PP Ojha