Faf du Plessis and the art of saving a Test

Australia dominated the Adelaide Test for a major portion of the game, but South Africa batted credibly well on the last day to help the visitors escape with a draw.

Australia dominated the Adelaide Test for a major portion of the game, but South Africa batted credibly well on the last day to help the visitors escape with a draw. The great escape was thanks in main to a brilliant, stonewalling effort from debutant Faf du Plessis. The middle-order bat, who managed to get a game only because of the injury to Jean-Paul Duminy, held the South African second innings together and batted for 464 minutes. He remained unbeaten till the very end as the game was drawn with the Proteas’ last two wickets standing.

It was a marathon effort by any stretch of the imagination, but one which will remain memorable for du Plessis not only because of the dire circumstances under which he scored his runs, but also considering that this was, after all, his debut Test. For someone playing his first Test, du Plessis’ performance was sensational to say the least. He could easily have thrown his bat around and gathered a few quick runs. No one would have blamed him had he failed since the seniors most seniors in the team had faltered. But, du Plessis was prepared for the hard grind, this after he had already registered an impressive half-century in the first innings. His fighting effort only proved his hunger for success. 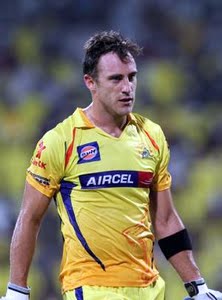 While du Plessis was clearly the chief architect of South Africa’s great escape, there were a couple of others whose contributions were highly significant as well. A B de Villiers, who is known for his attacking methods, stuck it out with du Plessis very well. The experienced batsman came to the crease when South Africa were struggling at 45 for 4, and left with the score at 134 for 5. More than the runs he scored, it was the amount of time he spent at the crease that mattered, which took the visitors closer to safety. He batted for as many as 235 minutes for his 33. The innings did not include a single boundary, a testimony to de Villiers’ patience.

South Africa had progressed only halfway towards safety, but they found another saviour in Jacques Kallis, who battled injury and played a vital hand in ensuring that Australia did not open their account in the series. During the course of his match-saving effort, Kallis reiterated what a tough character he is. The 149 minutes he spent at the crease went a long way in South Africa managing to stay alive in the series. In the end, the Proteas showed enough guts and gumption to deserve a draw.

As for Australia, they would be pleased with their overall performance, but would be disappointed at not finishing off the game. David Warner’s return to form at the top of the order was a big plus for the hosts even as Michael Clarke and Mike Hussey continued their run feast. The spinner Nathan Lyon was effective for most part. Australia would ideally want to finish off such games though.