South Africa completed a 4-wicket win in the Newlands Test on the fourth day to seal their 3-match Test Series against Pakistan 2-0. This is the sixth series win in a row for the World No.1 Test team. Pakistan, who were holding the edge going into the penultimate day disappointed with their batting to leave the Proteas with a modest target of 182 to chase.

South Africa completed a 4-wicket win in the Newlands Test on the fourth day to seal their 3-match Test Series against Pakistan 2-0. This is the sixth series win in a row for the World No.1 Test team. Pakistan, who were holding the edge going into the penultimate day disappointed with their batting to leave the Proteas with a modest target of 182 to chase. The match was over just few minutes before the scheduled close of play on Day 4.

Resuming Day 4 with a lead of 112 with 8 wickets in hand, Pakistan could add up only 69 more runs before getting bundled out just after Lunch. The first breakthrough of the day for the Proteas came when Misbah-ul-Haq (44) top edged a sweep shot off Robin Peterson to a delivery bowled in the rough outside leg. Vernon Philander took the next wicket when an unlucky Asad Shafiq bottom edged a backfoot defence onto the stumps to leave the visitors at 145 for 4. 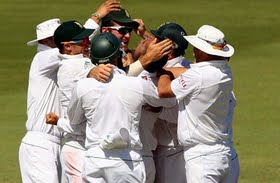 Wicket Keeper Sarfraz Ahmed (5) once again proved to be a dummy batsman at this level, this time leaving a Peterson delivery which pitched on leg and turned away to hit his exposed stumps. Vernon Philander accelerated the Pakistani collapse by removing Azhar Ali (65 from 193 balls, caught behind, edging an away going delivery on the backfoot) and Umar Gul (caught at gully after driving loosely at a widish full ball) in consecutive deliveries. After the Lunch break, the Proteas returned on the field to take the remaining two wickets with – Saeed Ajmal (bowled round his legs in a sweep off Peterson) and last man Mohammad Irfan fending off a nasty lifter from Steyn to gully as Pakistan folded to 169 all out in 75.3 overs.

The South Africans lost an early wicket in their run chase that of Alviro Petersen who was lbw to a skiddy indipper from Umar Gul in the 4th over. A 53-run stand after that between Skipper Graeme Smith and Hashim Amla weathered the storm for the hosts. Smith scored 29 before he was lbw just like in the first innings after missing a sweep off Ajmal. By Tea, SA were 66 for 2 with Hashim Amla looking very good.

After Tea, the match opened up slightly when Jacques Kallis (21) shuffled far too across for a backfoot flick and got himself lbw to Ajmal to leave SA at 88 for 3. The hosts recovered after this crucial blow with the positive AB de Villiers joining Amla and batting out Pakistan from the contest with a busy partnership of 62 runs. Amla eased his way to 58 (from 96 balls with 7 fours) before he was bowled through the gate by a classical off break which lured him into a big cover drive against the turn.

South Africa needing just 32 more to win after the exit of Amla, lost two more wickets that of AB de Villiers (36, edging a cut off Tanvir Ahmed to the keeper) and Faf du Plessis (15, lbw to a Saeed Ajmal delivery that spun back sharply). However, Pakistan just didn’t have enough runs to defend, and the Proteas reached the target of 182 in just 43.1 overs. Saeed Ajmal did all he could taking a 10-wicket match haul but couldn’t prevent the Proteas from yet another Test victory. Robin Peterson for his crucial knock of 84 and five wickets got the Man of the Match award.