South Africa finished an innings and 12-run victory during the extended post lunch session at The Oval. England’s resistance in their second innings lasted 97 overs as the hosts got bowled out for 240.

South Africa finished an innings and 12-run victory during the extended post lunch session at The Oval. England’s resistance in their second innings lasted 97 overs as the hosts got bowled out for 240.

The Proteas got their opening in the final session when Matt Prior lost his concentration and went through with a mighty slog sweep off Imran Tahir with three more overs to go for the second new ball. Prior (40 from 86 balls with 5 fours) got a feather top edge to the turning leg break which lobbed up to slip. South Africa had to wait for 32.2 overs to get this breakthrough. 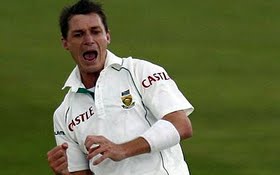 Once the second new ball was taken, South Africa made quick inroads to inch towards victory. Ian Bell (55 from 220 balls with 6 fours) finally got dismissed when he poked at a rising away going delivery from Steyn to second slip in the 83rd over. In no time, Steyn removed Stuart Broad (0, gloving a rising delivery to the keeper down the legside) and Graeme Swann (7, caught driving to covers).

The visitors had to patiently wait for around 10 overs to get their last wicket. It came through an unplayable delivery from Imran Tahir which spun in from outside off and stayed very low around the boot height to have James Anderson (4 from 24 balls) lbw. All-rounder Tim Bresnan remained unbeaten on 20 from 61 balls.

Dale Steyn with 5 for 56 and Imran Tahir with 3 for 63 were the main wicket takers for the South Africans who lead the 3-match Series 1-0. Hashim Amla was named the Player of the Match for his maiden triple century.

Lunch on Day 5: A stubborn partnership of 60 runs in 21.2 overs between Ian Bell and Matt Prior for the unbroken 6th wicket is holding fort for England on the final day of the opening Test at The Oval. England went to lunch at 177 for 5 with 75 more runs needed to make South Africa bat again. The hosts have Ian Bell (36* from 166 balls) fighting it out with Wicket Keeper Matt Prior (29* from 53 balls).

England resuming at 102 for 4 had a terrible start this morning losing overnight batsman Ravi Bopara very early to Dale Steyn. Bopara (22 from 55 balls) was bowled when he dragged a forcing backfoot shot onto the stumps.