Legendary Abdul Qadir spins into history, passes away at 63

Pakistan's legendary leg-spinner Abdul Qadir, credited with keeping the art of slow bowling alive in the 70s and 80s when fast bowling was dominant, is no more.

Pakistan's legendary leg-spinner Abdul Qadir, credited with keeping the art of slow bowling alive in the 70s and 80s when fast bowling was dominant, is no more. He died at 63 in Lahore after suffering a cardiac arrest.

According to media reports, Qadir was rushed to the Services Hospital in Lahore but could not be saved. He is survived by four sons and a daughter, who is married to wicket-keeper batsman Umar Akmal. Umar's elder brother Kamran, also a former wicket-keeper batsman, confirmed the news of Qadir's death to the media. 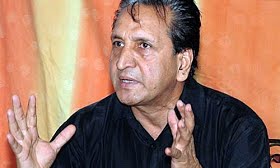 Qadir has the best bowling figures for a Pakistan spinner, 9 for 56 against a strong West Indies side at Faisalabad in 1986. He was highly rated by Imran Khan, and enjoyed tremendous success under him. Famous 90s spinners Mushtaq Ahmed and Shane Warne looked up to Qadir as a role model.

Post retirement, he even served as the chief selector of the Pakistan team. In fact, he was the one who chose the squad that won the 2009 World T20. However, he also quit midway through the tournament following a controversy that ensued over Shoaib Akhtar, who was not picked.

While Warne offered his condolences during commentary in the 4th Ashes Test which is underway, Indian spinners Ravichandran Ashwin and Harbhajan Singh took to social media to pay their respects.

"Extremely saddened by the demise of Abdul Qadir the spin bowling stalwart from Pakistan. My heart goes out to his family and friend," Ashwin wrote.

"Shocked to hear Abdul Qadir passed away.met him two years back he was full of energy as always..A champion bowler,Great human being,you will be missed forever..condolences to the family," Harbhajan posted on Twitter with picture featuring him, Qadir and Muttiah Muralitharan.

Javed Miandad, who had a long association with Qadir, told Indian Express that Qadir made the leg-break a lethal weapon. "He redefined leg-break. Leg-break as a lethal weapon started from Abdul Qadir and he always had the last word on that. He was the one who gave the googly and flipper completely different dimensions," Miandad was quoted as saying by Indian Express.

"If he were playing now, he would have had 500-600 Test wickets. Nobody could understand his flippers. He had two different types of googlies and very few batsmen could read him. Even Viv Richards struggled to pick him," Miandad further said in tribute to Qadir, in the same report.