In numbers: Important stats from 2nd T20 at Cuttack

India put up a listless performance in the second T20 at Cuttack to lose the series with one match to go. We take a look at the match in numbers.

India put up a listless performance in the second T20 at Cuttack to lose the series with one match to go. We take a look at the match in numbers.

India's paltry score of 92 is their second lowest in all T20 internationals. Their lowest ever is 74, which came against Australia in 2008. Also, during the innings, India were bowled out for the fourth time in T20 internationals. 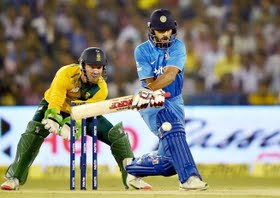 Ravichandran Ashwin is now the leading wicket-taker for India in T20 matches. His three wickets at Cuttack have taken his tally to 29. The earlier record was in the name of Irfan Pathan, who has 28 wickets to his credit.

With the latest defeat, M S Dhoni has now lost four consecutive T20s as leader, starting with the defeat in the World T20 final. The last time this happened to an Indian team, was also under Dhoni's captaincy, back in 2009.

India scored 199 runs in the first T20 and 92 in the second -- a massive difference of 107. Not surprising, this is the biggest difference in totals for India in consecutive T20 matches.

Rather incredibly, an Indian opener has been run out in each of the last four T20 matches the team has featured in. Shikhar Dhawan was run out in the first match of this series, and Rohit Sharma in the second. In the previous series in Zimbabwe, Ajinkya Rahane and Murali Vijay fell in the same mode.

The Cuttack match recorded the first instance of a team being bowled out in a T20 international in India.

South Africa's Albie Morkel made a memorable comeback to the national side, returning with figures of 3 for 12. These are now his best T20 figures, beating the previous best of 2 for 12 against England at Cape Town in 2007.

AB de Villiers was again dismissed by Ashwin in the second T20. It was the third time he had dismissed the South African batsman. No other Indian bowler has dismissed the same batsman thrice in T20s thus far.

Before the Cuttack failure, Virat Kohli was averaging nearly 70 in his last 10 innings. In fact, prior to his latest innings, he had crossed 20 in 10 consecutive visits to the crease.

Six Indian batsmen were dismissed for single-figure scores at Cuttack. While four others reached double figures, their highest was 22, jointly scored by Rohit Sharma and Suresh Raina.

Kyle Abbott was the only bowler to go wicketless in the South African innings. While the four other bowlers shared eight wickets among themselves, two run outs were effected.

Except Hashim Amla, everyone who batted during the South African chase got into double figures.

Out of the 17.1 overs delivered during the South African innings, only three were bowled by the pacers. All the others were by spinners.