All even as South Africa-England begin battle

This is officially the series that will decide which is the best team in the world. A win for England will ensure they continue to occupy that position while a triumph for the Proteas will mean that they will topple the hosts. It is not surprising then that neither England nor South Africa will begin the series as favourites.

This is officially the series that will decide which is the best team in the world. A win for England will ensure they continue to occupy that position while a triumph for the Proteas will mean that they will topple the hosts. It is not surprising then that neither England nor South Africa will begin the series as favourites. After all, they have done exceedingly well in recent times. England have won their last seven series’ played at home. At the same time, South Africa haven’t lost a Test series away from home since 2006. How closer can things get? Well they can. 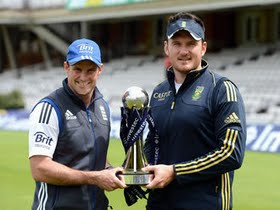 There are plenty of players in both teams who cancel out each other’s advantage. If England have in-form openers in Andrew Strauss and Alastair Cook, South Africa have skipper Graeme Smith, who will be playing his 100th Test. Although the other opener Alviro Petersen isn’t in the same league as Cook, his ton in the series against New Zealand will have given him some much-needed confidence for sure. The Proteas will be looking forward to get good starts so that their middle-order, even though very strong, isn’t pressurised too often.

In the middle-order as well, things are pretty much even between both sides. Numbers three, four and five are permanent fixtures while the number six on both sides are trying to establish themselves in the team. While England have Ian Bell, Jonathan Trott and Kevin Pietersen, all of whom are class players and, more importantly in form, South Africa can look forward to impressive efforts from Hashim Amla, A B de Villiers and of course Jacques Kallis. The hullabaloo of the retirement surrounding Kevin Pietersen in the shorter format of the game has been in the news in recent days. It would be interesting to see whether it has any impact on the team or Pietersen. Smith has already begun the verbal volley game, claiming the South African-born English cricketer will regret his ODI exit.

As for the number six spot, England will see Ravi Bopara making a comeback after a successful ODI series. Unless he gets injured again, Bopara should get a longer run at the number six spot considering his recent performances in the shorter format of the game. South Africa’s Jacques Rudolph has a rather different tale. He stormed onto the scene with some big scores, and was supposed to be the next super star of South African cricket. However, he failed to justify his place in the squad and was out for a number of years. He is back now, and the left-hander is yet to reestablish himself.

Just like the batting, there are plenty of similarities between the teams in the bowling as well. While England will bank on the pace of James Anderson, Stuart Broad and Tim Bresnan (or Steven Finn), the visitors have equally good pacers in Dale Steyn, Morne Morkel and Vernon Philander.

There is hardly anything that differentiates the two teams.