India clean sweeping Australia is not a thought even the most optimistic of Indian fans have in their minds. But, the T20 format does provide the visitors with a realistic chance to do so

India clean sweeping Australia is not a thought even the most optimistic of Indian fans have in their minds. But, the T20 format does provide the visitors with a realistic chance to do so. India will head into the Sydney T20 having outshone the Australians in both the previous matches at Adelaide and Melbourne. Their batting in both the matches has been excellent, and their bowlers have fought back hard in both games after initial hiccups. Australia, on the other hand, have suffered because they have failed to plan their chase properly. The fact that some key players were unavailable did not help their cause.

With the series already in the bag, India could be tempted to try out new combinations. At the same time, winning 3-0 in Australia will give the side a massive fillip, so they would not like to let such a rare opportunity slip. India’s top order has been fantastic, with the trio of Rohit Sharma, Shikhar Dhawan and Virat Kohli all among the runs, and scoring at will. Suresh Raina also got a hit in the first game. They would however like Yuvraj Singh to spend some time out in the middle, and promoting him at Sydney would not be a bad idea. 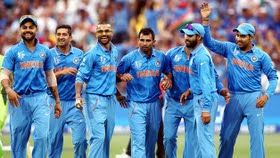 India’s bowling has also been highly impressive, rather surprisingly. They have been taken for plenty in the first half of both games, but have made admirable comebacks both times. Ravindra Jadeja was excellent at Sydney as well after bowling a tight spell at Melbourne. It was his brilliant catch to dismiss Shane Watson that turned the tide at Melbourne. Ravichandran Ashwin too has done reasonably well, but it has been the awkward Jasprit Bumrah who has impressed most. Not all is rosy for India though. Ashish Nehra hasn’t done anything special so far, and their fielding was atrocious on Friday.

India will be disappointed if they don’t crack the series 3-0. This is because Australia’s team will be further weakened for Sunday’s clash. Skipper Aaron Finch has already been ruled out due to his hamstring injury, and the captainship duty has been handed over to Shane Watson for Sunday. More significantly, in addition to David Warner and Steven Smith, Australia will also miss the services of John Hastings, Kane Richardson or Matthew Wade, all of whom will be preparing for the New Zealand series. Australia have played only one T20 in the last year, before this series, and the lack of practice is showing up.

While the absence of regulars gives a chance for the fringe players to make a mark, Australia definitely have some worries to deal with. Chris Lynn has found the going much tougher than in the BBL even as Shaun Tait will be under pressure to deliver after the horror comeback. Australia are also unsure about their spin option, choosing between Nathan Lyon and Cameron Boyce. Also, they are bringing in a debutant wicket-keeper in Cameron Bancroft, with Matthew Wade being unable to deliver with the bat. India would be raring to have another go at the weakened Aussies.