A Captain’s knock from Graeme Smith helped South Africa to put up a fitting reply to Australia huge first innings total in the Second Test at the Adelaide Oval. Smith scored his 26th Test century as the visitors finished Day 2 at an impressive 217 for 2 in 67 overs having restricted the Aussies to 550 early on.

A Captain’s knock from Graeme Smith helped South Africa to put up a fitting reply to Australia huge first innings total in the Second Test at the Adelaide Oval. Smith scored his 26th Test century as the visitors finished Day 2 at an impressive 217 for 2 in 67 overs having restricted the Aussies to 550 early on. There is still plenty of work to be done by the Proteas, atleast a full day of batting on the third day if they have to come anywhere close to the Australian first innings total. At stumps on Day 2, the Proteas are still 333 runs in deficit with 8 wickets in hand.

The second day’s play saw Australia losing five wickets with the addition of just the 68 runs. Overnight double centurion Michael Clarke was cleaned up by Morne Morkel’s full length delivery pretty early in the morning. Clarke finished with 230 to his name which came in just 257 balls with as many as 40 fours and a six. After Clarke’s dismissal, the South Africans wasted little time in wrapping up the Aussie first innings. Fast bowler James Pattinson came up with a useful cameo of 42 (from 35 balls with 4 fours and 2 sixes) to stretch the Aussies to a safe total of 550. Morne Morkel finished with five wickets although he was smacked around for 146 runs in 30 overs. 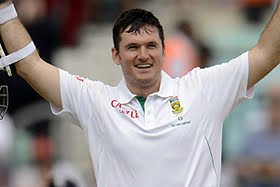 South Africa in their first innings got the much needed solid opening partnership from Graeme Smith and Alviro Petersen. The opening stand put on 138 runs in 41.2 overs before Alviro Petersen (54 from 112 balls with 7 fours) lost his wicket by not dragging his bat through into the crease to get run out. The Aussies had another lucky wicket when Hashim Amla (11) charged down the track but yorker himself to a David Warner delivery and got stumped in the second attempt by Matthew Wade.

At 169 for 2, the Proteas were under pressure but fortunately the pair of Graeme Smith (111* from 220 balls with 12 fours) and Jacques Rudolph (25*) saw them through to stumps safely. South Africa’s next challenge will be against the second new ball tomorrow morning and they will be hampered by the hamstring injury of Jacques Kallis who could struggle to bat.