Nabi: Try to do the last thing batsmen want me to do

Mohammad Nabi starred for Hyderabad with 2 for 21 as Hyderabad registered yet another impressive win against Delhi at Feroz Shah Kotla. Nabi got the key wickets of Shikhar Dhawan and Rishabh Pant as Delhi's batting yet again faltered.

Jonny Bairstow then led the chase for the Hyderabad after David Warner experienced a rare failure as the visitors got home with ease. An incredible stat about Nabi is he has never featured in a losing cause in Indian T20 Cricket. He has played seven games so far and all have been in wins. 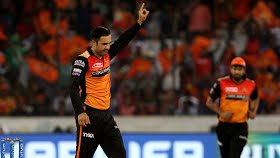 Speaking about his so far successful stint with Hyderabad, Nabi was quoted as saying in a EspnCricinfo report, "We have played with each other for three years now. We understand the team combination and understand we will not play every match. I am always ready to give my 100% whenever I get the chance."

Asked about how he manages to attain success in an era when mystery spin is dominant, Nabi goes onto say, "I read batsmen. I try to do the last thing the batsmen want me to do. Read what the batsman is trying to do, read what the conditions are doing, and then bowl accordingly. Here the ball was turning so I tried to turn it less."

With the win, rsSunrise achieved their third win in a row while Delhi's season is turning awry after a stunning start.