Ashwin on Mankading Buttler: He wasn't even looking at me and just left the place

Ravichandran Ashwin, who is at the center of the Mankading storm over the controversial dismissal of Jos Buttler

Ravichandran Ashwin, who is at the center of the Mankading storm over the controversial dismissal of Jos Buttler, said he did something which was only within the rules of the game.

Opinions were divided after the Punjab skipper Ashwin Mankaded Rajasthan opener Jos Buttler who was way out of his crease. It sparked a stunning collapse as Royals crumbled to a 14-run defeat after being comfortably placed at 108 for 1 chasing 185.

Explaining his move, Ashwin said at the post-match conference, "It was pretty instinctive. I actually didn't load and he (Buttler) left the crease. That's always been my take on it because it's my half of the crease. I was not even at the crease, he wasn't even looking at me and he just left the place," Ashwin said. 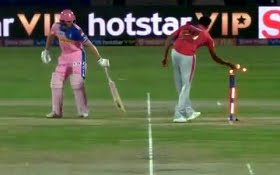 On whether he felt Buttler's dismissal was the turning point in the game, Ashwin conceded, "We ended on the right side of the coin, but I definitely think that those are game-changing moments."

As expected, at the post-match press conference, he was asked about the rules of the game as opposed to the spirit of cricket. Explaining his stance, Ashwin said, "It was instinctive. It wasn't planned. I don't know where the spirit of the game things comes because if it's within the rules, it is. I don't understand the point of sporting spirit because it is within the rules."