Thursday, April 2 marks the ninth anniversary of India's 2011 World Cup triumph. On the occasion, a renowned website tweeted about the famous MS Dhoni six that won India the coveted trophy after 28 years.

"On this day in 2011, the shot that sent millions of Indians into jubilation", ESPNCricinfo tweeted. However, former India opener Gautam Gambhir did not seem too pleased with the tweet. "Just a reminder @ESPNcricinfo: #worldcup2011 was won by entire India, entire Indian team & all support staff. High time you hit your obsession for a SIX," Gambhir responded to the same. 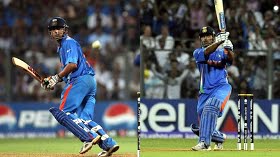 It is no secret that Gambhir has not been too pleased with Dhoni walking away with the limelight following India's famous World Cup win. He had earlier stated that Dhoni had distracted him, reminding him of approaching a personal landmark during the final.

India won the 2011 World Cup final defeating Sri Lanka by six wickets at the Wankhede Stadium in Mumbai. The image of Dhoni smashing Nuwan Kulasekara into the stands to win the match for India will be etched in Indian fans' memory forever. Gambhir however seems to have a different take on it.

Sri Lanka won the toss and opted to bat in the final. After losing Upul Tharanga (2) early, Tillakaratne Dilshan (33) and skipper Kumar Sangakkara (48) consolidated the innings. It was Mahela Jayawardene's hundred that threatened to take the game away from India. Jayawardene eased his way to an unbeaten 103 from 88 balls as Sri Lanka posted an impressive 274 for 6.

India got off to a terrible start in the chase as Virender Sehwag was trapped lbw for 0 by Lasith Malinga in the first over while Sachin Tendulkar was caught behind for 18 from 14 off the same bowler. India were struggling at 31 for 2 with their big openers back in the hut.

Gambhir (97) and Delhi boy Virat Kohli (35) then featured in a steadying stand for the third wicket before Dilshan brought Sri Lanka back in the game by having Kohli brilliantly caught and bowled. Gambhir and Dhoni (91 not out) then featured in the game-changing 109-run stand for the fourth wicket. The partnership was broken when Gambhir took a wild swish at Thisara Perera and fell three short of what would have been a hard-fought hundred.

Dhoni went on to win the game for India in the company of man of the series Yuvraj Singh, who remained unbeaten on 21 from 24 balls.