Royal Challengers Bangalore and Kings XI Punjab have been two of the most inconsistent teams in the IPL this year, which makes for a very interesting premise as they face each other in match number 39 of IPL 9 at Mohali on Monday.

Royal Challengers Bangalore and Kings XI Punjab have been two of the most inconsistent teams in the IPL this year, which makes for a very interesting premise as they face each other in match number 39 of IPL 9 at Mohali on Monday. Owing to their inconsistency, both sides find themselves in a very similar position as of now, but they would be pleased with the fact that they won their respective last games. While a superb hundred from Virat Kohli led RCB to victory over Rising Pune Supergiants, Punjab got the better of Delhi Daredevils with an impressive all-round effort.

Bangalore have been brilliant with the bat right throughout the tournament, and yet find themselves towards the bottom rung of the points table. Kohli's first hundred in the IPL was a brilliant one, but came in a losing cause. He hasn't lost hope though, and this never-say-die attitude of his saw him smash another brilliant ton against Pune, and this time it wasn't in vain. It was a special knock that outthought ODI skipper MS Dhoni, who was at the other end. Kohli's exploits forced Aussie spinner Adam Zampa to comment that Kohli's batting like a machine. Quite true, and Bangalore will not want that to change in any way.

Even as Kohli has led the way with the bat, there have been a few others who have also impressed. Lokesh Rahul was not expected to do a lot in the T20 format, but he has certainly demonstrated that he has the talent to shift gears. Among others, AB de Villiers has excelled in a number of matches. The experience of Shane Watson and the exuberance of Sarfaraz Khan have also come in handy with the bat. Chris Gayle has been dropped more than once in the tournament, so he will be keen to change his fortunes. It is in the bowling though that they really have to somehow pick up the pieces.

For the Kings, the tournament is all but over. That said, they can still play spoiler, and have already begun showing some improvements, having gotten the better of Gujarat Lions and Delhi Daredevils in recent times, both of whom are reasonably strong teams. The Kings have a star-filled batting line-up, but the men haven't come to the party, which has affected them in a big way. The likes of skipper Murali Vijay, ex-captain David Miller and Glenn Maxwell all need to get their act together. Hashim Amla, who has come in for Shaun Marsh, will also be keen to make an impact. 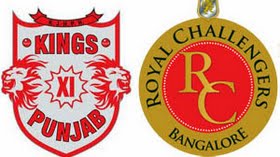 If at all Punjab have managed to resurrect their campaign to some extent, it has been because of the likes of Marcus Stoinis. The Australian all-rounder has shone with both bat and ball in the last couple of games. After a not so impressive start, the now experienced Mohit Sharma has been getting his act together while Sandeep Sharma has easily been the most consistent of Punjab's bowlers. They will have their task cut out against Virat Kohli and co though. In a contest of big hitters, the side which bowls better is likely to get home.