South Africa steady with the bat after England's 385

Stumps on Day 2: The final session was hit by heavy rain but with play extended for an hour, not much of play was lost. South Africa faced 26 overs in the final session without losing any wickets at all with Graeme Smith (37* from 118 balls with 4 fours) and Hashim Amla (47* from 97 balls with 6 fours) looking very comfortable at the crease. By the close of play, South Africa brought the deficit down to 299 runs. The visitors look in control as of now at 86 for 1 in 37 overs.

Tea on Day 2: South Africa are 25 for 1 at Tea on Day 2 after bowling out England for 385. The visitors had lost an early wicket in the 3rd over when Alviro Petersen was lbw to a late inswinger from James Anderson for an 8-ball duck. Since then, Graeme Smith (14*) along with Hashim Amla (10*) took the Proteas safely through at 25 for 1 in 11 overs by the Tea Break under gloomy conditions. 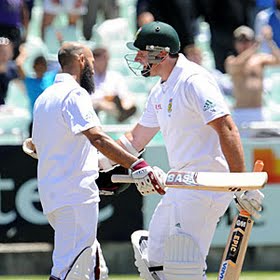 England added 59 useful runs in the final session before their innings was wrapped up. Matt Prior scored a fighting 60 from 90 balls with 9 fours before he was caught behind off Morne Morkel in a forcing backfoot drive. The two other English wickets to fall in the post lunch session were that of Stuart Broad (bowled off the backfoot by Vernon Philander) and last man James Anderson (caught down the legside by the keeper while fending a rising delivery from Morne Morkel). Graeme Swann remained unbeaten with 15.

Lunch on Day 2: South Africa are on top in The Oval Test after reducing England to 326 for 7 by Lunch on Day 2. England could add only 63 runs in 25 overs losing as many as four wickets! At the crease for England at lunch are Matt Prior (32* from 63 balls with 5 fours) and Stuart Broad (8*).

The morning started with the big wicket of Alastair Cook falling down in the third over itself. Cook (115 from 295 balls with 11 fours and a six) dragged a cover drive onto the stumps off a full length late inswinger from Dale Steyn. Very soon, Steyn got Ravi Bopara (0 from 6 balls) caught behind in a half hearted pull shot to a bouncer outside off.

After a few overs, the last specialist batsman Ian Bell (13 from 56 balls) too perished when he offered no shot on the backfoot to a Jacques Kallis inswinger to get clean bowled. By the lunch break, the Proteas could break a promising stand for the 7th wicket when Tim Bresnan (8) bottom edged his forcing backfoot shot off Imran Tahir onto his woodwork.

Build up to Day 2: England are nicely placed at 267 for 3 when they resumed Day 2 of the opening Test at The Oval in London. The gameplan for England will be to pile up the runs to have the Proteas staring at a huge first innings deficit. Alastair Cook (114*) will resume the second day morning with Ian Bell (10*) for the hosts with the second new ball less than 10 overs old.