India discard Ajit Agarkar has been named as the Captain of the Mumbai Team for its first four Ranji Trophy matches of this season.

India discard Ajit Agarkar has been named as the Captain of the Mumbai Team for its first four Ranji Trophy matches of this season. The Mumbai Selectors have named a 13-man squad for the team’s opening match against Railways which begins on the 2nd of this month. India’s Test stars Sachin Tendulkar and Zaheer Khan will feature in this game to gain some match practice ahead of the England Test Series. 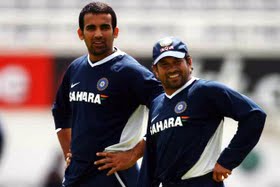 Sachin Tendulkar will play a Ranji match after a gap of three years. The legendary batsman has been struggling since the New Zealand Test Series to get amongst the runs. He has recently played in the Champions League T20 in South Africa where he turned out to be a cropper against some quality bowlers. A desperate Tendulkar will be trying his level best to spend lots of time in the middle with the bat against Railways. Zaheer Khan has also struggled of late and will have to mostly prove his match fitness. The left-arm pacer was lukewarm with his pace during the New Zealand Series and the World T20.

The Mumbai team will be missing the services of seasoned top order batsman Wasim Jaffer who is on a Haj pilgrimage. Mumbai will also missing the highly rated young left-arm spinner Harmeet Singh who is recovering from a finger injury.